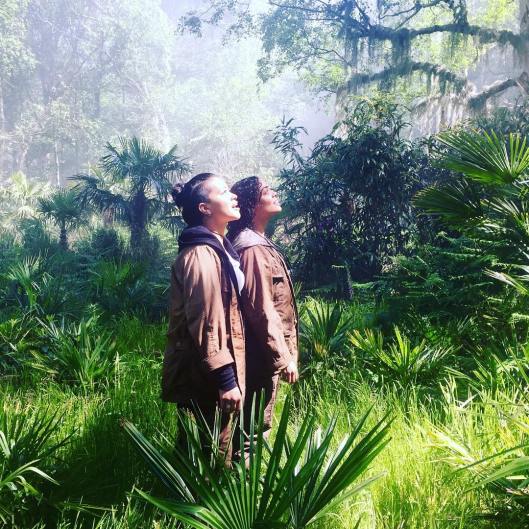 It’s a damn good day. Thanks to Entertainment Weekly, we now have our first official look at one of next year’s most anticipated, Annihilation. The film is written and directed by Alex Garland, the man behind 2015’s best overall film, Ex Machina. The film is based on the “terrifying horror” novel by Jeff VanderMeer of the same name, which is the first of a trilogy. We’ve actually received a few bts shots  from the film via instagram, but EW revealed our first look this morning, which also came with the news that the trailer will be dropped tomorrow. HOLD THE PHONE.

As for the story, here’s a great excerpt from Collider on Garland’s new story:

“The story of Annihilation follows the expedition of four women who are sent into the mysterious “Area X”, a portion of land in the United States that has been secretly quarantined due to abnormal activity. They are the twelfth expedition sent into Area X on behalf of the mysterious Southern Reach organization. The second expedition ended in mass suicide, the third in a hail of gunfire as the members turned on one another, and the eleventh expedition returned as shells of their former selves, all dying of cancer shortly after coming back.”

Natalie Portman leads the cast as the lead scientist. The debut image shows her character Lena (who has no official name in the book) strongly looking at what looks to be a deceased alligator inside Area X. In EW’s article, Garland revealed that the alligator is the teams first strange encounter inside Area X, where he says the gator “has physical elements to it that should not belong on an alligator.” He also had this to say on the idea of it being a trilogy starter:

“I did once work on a film called Dredd, which I imagined to be the first part of a trilogy,” says Garland. “But it’s not something I like doing. I’d rather work on a story that I felt was self-contained rather than one that sort of had a ‘dot-dot-dot’ at the end. I think that provokes a sort of instant, understandable, cynicism. We sense the money grab and I feel that pollutes the story. So, right from the get-go, I did not think of this as being part of a trilogy; I thought of it as being just a single, self-contained movie. If other people wanted to do that, that would be fine. That’s none of my business. But from my point of view, it’s just one.”

Make sure you come back here tomorrow as we’ll be covering everything Annihilation as soon as it’s released. The film also stars Jennifer Jason Leigh, Gina Rodriguez, Tessa Thompson, Tuva Novotny, and Oscar Isaac and will be released on February 23rd, 2018.