Wow wow wow wow wow. The first official poster for the upcoming Tomb Raider reboot has officially been released and hot damn does it get me all kinds of excited for the new movie! But that’s not the only news that’s arrived, as it was revealed that we’ll be getting our first look at the film tomorrow with its first trailer. Are you ready for a new adventure? 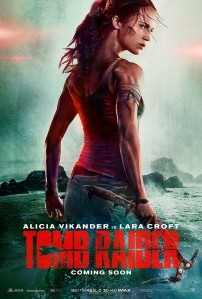 I’ve loved everything I’ve seen from this movie so far. From the moment those first set photos arrived, it has looked like a great new telling of this beloved story and character. And the fact that my favorite actress working today is starring in the role, how can I not be excited for this?

With the new video games coming out over the last few years, this film will be an iteration of those stories, focusing a younger Lara Croft who is just starting out. And while it hasn’t been confirmed, it’s been speculated that much of the story will follow young Croft as she searches for her father in a distant land, where many enemies are hunting her down.

Whichever story they are telling, I’m down either way because this brand new poster has given me even more reason as to why I should be excited. Look at how on point Vikander looks as the character, not to mention that AWESOME bladed weapon she’s wielding. And ahead of its first trailer tomorrow, a short teaser has been released teasing what’s to come! Sign me up! Tomb Raider will hit theaters on March 16th, 2018.