‘Iron Fist’ Has Been Renewed for Season 2

With The Defenders premiering on Netflix in less than a month and Comic Con coming to an end, we’ve been wondering if we were going to be getting a season 2 of Iron Fist. Well thankfully the story of Danny Rand will continue as it was confirmed during San Diego Comic Con that there will in fact be a second season of Iron Fist.

With the renewal of the second season, news that showrunner Scott Buck would be stepping down and Raven Metzner will be taking Buck’s place for season 2. Metzner is currently a executive producer for the TV show Sleepy Hollow, and now will take over for Buck. Iron Fist hasn’t been the most liked of the Marvel Netflix television shows. Out of the four, it has the lowest ratings from rotten tomatoes sitting currently at 17% Rotten while the other shows are all above 85% with Luke Cage taking the top spot at 96% fresh.

So what changes are we going to be expecting to see in the new season? Going off of what the season finale left us with, Joy Meachum and Davos both meet and agreed that Danny Rand needed to be eliminated. Personally I see Joy taking a major villain role and Davos playing puppet master. As many of you know, Davos becomes one of Iron Fist’s biggest villains known as Steel Serpent. While I don’t fully expect to see Davos become Steel Serpent, I do think we will get him towards the end of season 2 setting him up as the big bad of  season 3, hopefully.

One thing that will be exciting to see is that Misty Knight, the detective from Luke Cage, will be coming to the show’s second season. Misty Knight is a pretty big deal for the character as she, at some point, becomes a love interest of Danny Rand. What is even more exciting is that in the comics, Misty Knight and Colleen Wing eventually team up and become the duo better known as “The Daughters of the Dragon,” which could have a large impact on the Marvel Netflix universe.

So with all this information coming regarding season 2, does it get you excited for a second season, or was the first season so disappointing that you don’t need another? Let me know in the comments below! The show is expected to make a return in 2019. 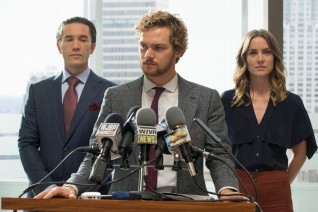