‘The Snowman’ First Trailer: Michael Fassbender Searches for a Killer

Universal Pictures has released the first trailer for their upcoming thriller The Snowman. Directed by Tomas Alfredson (Tinker Tailor Soldier Spy), The Snowman is best on the novel of the same name and follows a lead detective (Fassbender) who fears a killer may be active once again after a victim

disappeared on the first snow of winter. With the help of a recruit (Rebecca Ferguson), he must connect the dots between decade-old cold cases and new ones if he hopes to outwit evil before the next snowfall.

I’m totally in on this one. I was incredibly intrigued with what I was watching from this trailer, and for multiple reasons. Mystery movies, good ones anyway, are always interesting. You never really know where they’re headed and if it’s good, it will leave you sitting forward in your seat, which is actually the kind of tease this trailer had. Two, the cast is very strong. All actors and actresses have bad movies or the so-called “throwaways,” but it’s always a positive to see such talent get involved in a project like this.

The Snowman isn’t the most original story ever, as we’ve seen multiple kinds of this story before, but it has a very solid source material. Book to screen adaptations are always tough, as you never really know what to recreate and what not to. If the director and his crew have crafted the best story possible for this iteration, which the trailer definitely gives off that vibe, then The Snowman could be the Gone Girl/The Girl on a Train type film of 2017, but let’s not get there quite yet.

Check out the first trailer below and after doing so, head down to the comments and let me know what you think. Are you as interested as I am? Or is it something you’ve seen before? Also starring, Charlotte Gainsbourg, Val Kilmer and J.K. Simmons, The Snowman hits theaters on October 20th.

When an elite crime squad’s lead detective (Fassbender) investigates the disappearance of a victim on the first snow of winter, he fears an elusive serial killer may be active again. With the help of a brilliant recruit (Ferguson), the cop must connect decades-old cold cases to the brutal new one if he hopes to outwit this unthinkable evil before the next snowfall. 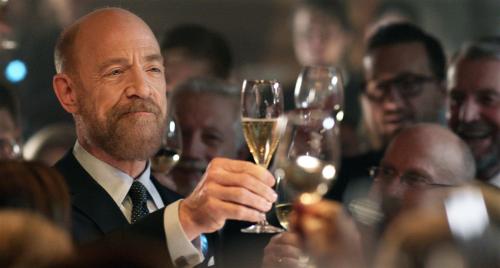