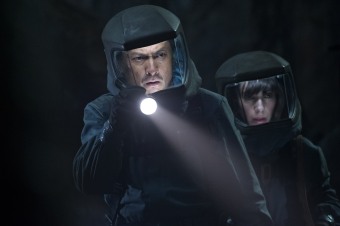 “Welcome to a new world of gods and monsters.” A line that was spoken in The Mummy by Russell Crowe’s Dr. Jekyll is easily a better fit with Legendary and Warner Bros. have cooking up. Today marked the official filming of Godzilla 2, the third installment in the true monster universe filled with Gareth Edwards’ Godzilla and Jordan Vogt-Roberts’ King Kong. And to mark the occasion, as usually happens, Legendary and WB released a press released that not only revealed the official cast list, but the synopsis as well, which teases “a battery of god-sized monsters.”

The next chapter of this cinematic MonsterVerse was originally going to be directed by original director Godzilla, but after an early exit from the Rogue One: A Star Wars Story director, Krampus helmer Michael Dougherty has been heading the project ever since. As for the cast, only Ken Watanabe and Sally Hawkins will be making a return from the first, which makes complete sense being they were the two heading the all-important agency known as Monarch (S.H.I.E.L.D. of the MonsterVerse). In the sequel, Watanabe and Hawkins will be joined by Vera Farmiga, Kyle Chandler, Stranger Things breakout Millie Bobby Brown, Charles Dance, Thomas Middleditch, and O’Shea Jackson Jr.. Here’s what the cast will be up against in the sequel:

The new story follows the heroic efforts of the crypto-zoological agency Monarch as its members face off against a battery of god-sized monsters, including the mighty Godzilla, who collides with Mothra, Rodan, and his ultimate nemesis, the three-headed King Ghidorah.  When these ancient super-species—thought to be mere myths—rise again, they all vie for supremacy, leaving humanity’s very existence hanging in the balance.

It sounds like we’ll be watching some insane chaos come 2019, which should easily satisfy fans after Edwards’ Godzilla shut the door on that department on more than just one occasion. One aspect that wasn’t favored by many in Edwards’ Godzilla were the human characters and their connection to the larger

part of the film. With such strong names in the sequel, I’m very interested to see how big of a part they play, if they’re connected to the monster mayhem going on outside, or if they have a story of their own.

I was a big fan of both Godzilla and Vogt-Roberts’ Kong: Skull Island, each bringing something fresh to not just the blockbuster, but the story behind each of these creatures. And with Godzilla vs. Kong just one film away, it’ll be even more interesting to see how Godzilla 2 lays the groundwork for what follows. Meaning, how do they bring these two colossal beasts together?

What you say? Were you a fan of Godzilla and Kong: Skull Island? How about the cast? Are you looking forward to the sequel or just waiting until the ultimo showdown in 2020? Dougherty’s Godzilla 2 will hit theaters on March 22, 2019.