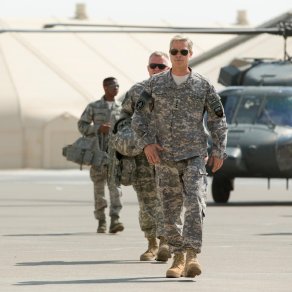 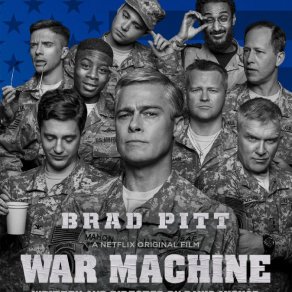 Netflix has released the second official trailer for their upcoming war dramedy War Machine, which stars Brad Pitt in the lead role. War Machine recreates a U.S. General’s roller coaster rise and fall as part reality, part parody. Pitt stars as a successful, charismatic four-star general who didn’t hesitate to command NATO forces in Afghanistan, only to be taken down by a journalists’ exposé.

Netflix is seriously stepping up their game. Not that their game wasn’t legit already, but they are continuing to push their own boundaries. with film becoming a huge part of the streaming service here recently, War Machine looks like it’s one of the companies peak projects. It features a pretty good cast and is pulling off the whole Inglorious Basterds things where some of it’s true, some of it could be true, and some of it ain’t even close to being true. But the standout for me, as I’m sure it will be for most of you, is Pitt. We’re used to seeing the drop-dead guy we’ve come to know over the last few decades in specific type of roles, but I couldn’t be more excited to see him take on a role such as this one. He looks to be fully embracing the opportunity, one that falls very close to his character from Inglorious Basterds. Could Pitt get some kind of nom for this role? It’s definitely a possibility.

Check out the new trailer below and after doing so, let me know your thoughts in the comments. Are you on board with Netflix’s latest? What about Pitt and the rest of the cast? David Michôd’s War Machine will be released on May 26th, 2017 and stars Brad Pitt, Ben Kingsley, Alan Ruck, Topher Grace, RJ Cyler, Will Poulter, and Anthony Michael Hall.

An absurdist war story for our times, writer-director David Michôd (Animal Kingdom) recreates a U.S. General’s roller-coaster rise and fall as part reality, part savage parody – raising the specter of just where the line between them lies today. His is an exploration of a born leader’s ultra-confident march right into the dark heart of folly. At the story’s core is Brad Pitt’s sly take on a successful, charismatic four-star general who leapt in like a rock star to command NATO forces in Afghanistan, only to be taken down by a journalist’s no-holds-barred exposé.