Thanks to Entertainment Weekly, we now have our first official look at the star-studded adaptation of the classic story from Agatha Christie, Murder on the Orient Express. Back by 20th Century Fox and directed by (as well as featuring) Thor and Cinderella helmer Kenneth Branagh, the big screen mystery features one of the best, if not the best cast we’ll see all year. The images revealed by EW let us see most (but not all) of the cast members in their train-traveling attire, as the search for a murderer begins.

I haven’t read the story of which the film is based on, but I’ve heard nothing but fantastic things about the mystery that takes place. What starts as a luxurious train ride through Europe for thirteen passengers quickly turns to terror as one of them is murdered. Stranded where everyone’s a suspect, one man must solve the mystery before the murderer strikes again. Obviously by the sound of the synopsis and the look of the new images, it’s a pretty stylish period piece, which is something Branagh is very strong at. And with the cast being as talented as it is, I’m really eager to see it come to life. Fingers crossed for a trailer sooner rather than later!

Check out the new images below and after doing so, let me know if you’re looking forward to the film or not. Does the cast get you excited? Have you read the book? Are you holding your stance until a first trailer? Murder on the Orient Express will arrive in theaters on November 10th, 2017. 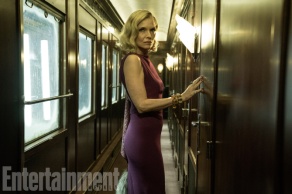 What starts out as a lavish train ride through Europe quickly unfolds into one of the most stylish, suspenseful and thrilling mysteries ever told. From the novel by best selling author Agatha Christie, “Murder on the Orient Express” tells the tale of thirteen strangers stranded on a train, where everyone’s a suspect. One man must race against time to solve the puzzle before the murderer strikes again.