Upon Further Review: Lightsaber Duels in the ‘Star Wars’ Prequels

Lightsaber duels. It’s one of the best things about the prequels, and also one of the worst things about the prequels. Disagree? Take a look at the picture above from Revenge of the Sith. Whenever I see this picture, I’m reminded of that entrance Mace Windu & his fellow Jedi masters make on their way to arresting Palpatine. Their defensive stance signaled that some shit was about to go down when confronting the Sith, and they knew it. Of course we all remember how this sequence played out. Three out of the four Jedi masters get killed by Palpatine in under ten seconds (TEN SECONDS!!!), which then leads to one of the weaker lightsaber duels in all of the Stars Wars saga, between a Sith and the second most powerful Jedi.

The truth is, seeing the picture above gets me more excited about its potential than the final product, as I recreate a better lightsaber duel sequence in my head. I can say that about nearly half the lightsaber duels in the prequels, as they fell short of their potential. You see, this all started in The Phantom Menace, where audiences were introduced to a newer, faster fighting style of lightsaber than they’ve ever seen before.

I think the right approach was taken in recreating lightsaber fighting styles for the prequel era, where the Jedi were at their peak. Episode I stunt coordinator Nick Gillard combined multiple sword fighting styles, such as Kendo and kenjutsu, with swinging techniques from physical activities like tennis and tree-chopping. The results were undoubtedly impressive to watch on the big screen, and unlike anything us Star Wars fans could ever imagine at the time. I still remember being a ten year old boy with my jaw to the floor, as I watched Darth Maul fight with such agility and intensity. He brought lightsaber fighting to a new level, doing flips and kicks in between swings in his fight against Qui-Gon and Obi-Wan (second best duel in SW history). In all honesty, seeing the prequel era lightsaber duels paired with the music of John Williams, as a child and teenager was the best thing ever. However, upon further review of these lightsaber duels, as a whole throughout my young adulthood has altered my opinion. 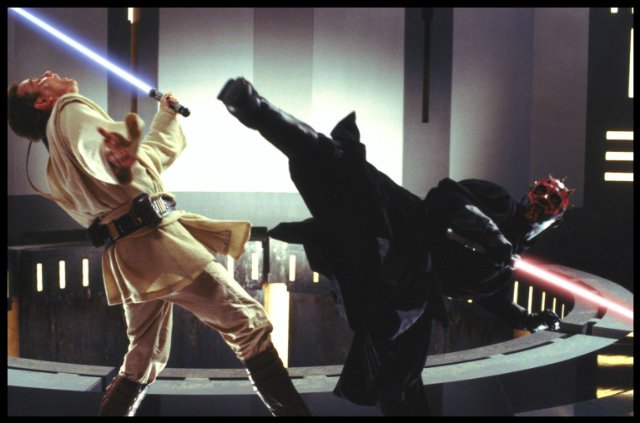 I still love what I saw in The Phantom Menace, mainly because of Darth Maul. As I stated above, the character let his fighting do the talking, and he talked loud and plenty. There’s a reason he’s so beloved by the fan base. Moving quickly to Episode II, it’s so obvious, in many ways that George Lucas was in a hurry to get to Episode III. Keeping the focus on the lightsaber duels though, the semi-finale faceoff between Count Dooku and Anakin Skywalker (see below) pales in comparison to what Episode I gave us.  Too much lightsaber twirling and close up shots of the actor’s faces. Surely you’ve seen this battle a few times, so I’m not treading any new ground here. The late Christopher Lee had to follow up Ray Park’s (Maul) memorable duel against the Jedi. Although Dooku’s lightsaber duels against the Jedi didn’t have the flare and speed of Maul’s, he could still beat you in more ways than one. My canon knowledge is a rusty, but last I checked Dooku is more powerful and wiser than Maul, thus leading to different kinds of fighting techniques.

For example, before that poor excuse of a lightsaber duel between Dooku and a padawan Anakin, the former takes on Obi-Wan (see below). First off, the sound Dooku’s lightsaber makes when igniting, I was like “oh no, Obi-Wan is f*cked”. But what stood out was how Dooku succeeds in getting into Obi-Wan’s head by questioning his reputation held by Yoda, thus getting Obi-Wan to try harder. Mind games. Speaking of Yoda, how about a showcase of force strength before finally seeing the little green guy in action. Bottom line  though is Dooku provided a different kind of challenge against the Jedi than Maul, but that doesn’t excuse the bad sword fight choreography in his fight with Anakin. You’re left wanting much more, which leads into the next film.

Finally there’s Episode III, where this whole article began. There’s no shortage of lightsaber duels, and why should there be? The Jedi suddenly find themselves fighting for their very existence. The quality of the duels themselves are like an up & down roller coaster. It starts with a rematch between Anakin versus Dooku, and it’s immediately better than their first fight in Episode II. Granted Anakin’s powers have doubled since the last time they met, as he points out early on in the fight, but there’s a sense of urgency and stakes in this battle. Also, what Star Wars fan will ever forget the move Anakin put on Dooku that cut off both his hands? My reaction mimic that of Palpatine’s.

The next couple of duels following Anakin versus Dooku aren’t so good. Sure, General Grevious having four lightsabers versus Obi-Wan is cool, but as we quickly learn it’s all style no substance. I’ve already addressed the duel between Mace Windu and his Jedi masters against Palpatine. Things only get weirder as that duel progresses, with Palpatine doing these crazy flips and making a stupid face when striking Mace. It’s not until the climactic duels (Sidious vs. Yoda & Obi-Wan vs. Anakin) where Lucas unleashes it all.

These battles aren’t perfect, but Lucas succeeds in making them feel grand in scale. The battle on Mustafar is filled with so much emotion, thanks in part to Battle of Heroes, and a friendship that’s somewhat fleshed out. However, that duel feels a bit too long, a bit too choreographed, and ends on a very infamous note (I HAVE THE HIGH GROUND). Meanwhile, the Yoda vs. Sidious features everything a Star Wars fan could ask for, with lightsaber fighting, force throwing huge objects, and of course force lighting. This duel also ends on a very questionable note, as Yoda just gives up, and goes into exile. I never bought into that.

In the end, what can I say that hasn’t already been said? These prequel lightsaber duels are inconsistent as far as quality, but for the most part are fun to watch, and help make up for the prequel’s disappointing overall result. These duels started out on a high note in The Phantom Menace, before being somewhat dull in Attack of the Clones, and later closing out mostly strong in Revenge of the Sith. They wouldn’t be anything without the music of John Williams, and together they make for some of the better moments in the prequel era.

What was your favorite/least favorite lightsaber duel in the prequels?