Transformers: The Last Knight is now just three months out, which means its marketing campaign will be kicked up a notch here in the next few weeks. We received a (kind of) new trailer last week and for this week. Paramount Pictures has released a set of motion posters for the Michael Bay movie, all of which focus on the two sides of giant ass-kicking robots. 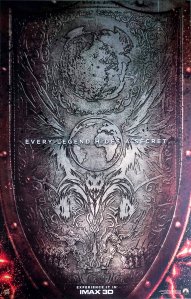 The new posters include the familiar faces of Optimus Prime, Bumblebee, Hound and the reborn version of Megatron, as well as the newly added characters of Barricade, Cogman, Sqweeks, and Hot Rod. With each Transformers Bay does, he has always added a number of new robots to the story. But with so many getting the focus this time around with their own posters, it’ll be interesting to see how (if) they fit into the story or if they’re there just for a all-out battle royale at some point within the movie. I’m leaning much more to the latter, not just because the trailers have given off a dystopian style future, but because honestly, I don’t need a plot for these movies, I just want to see some awesome metal-to-metal action. Let’s just make it fun this time around.

On top of the release of the new motion posters, Paramount recently held a fan event on their lot and treated fans to a number of special goodies. They were given a special behind-the-scenes look at The Last Knight, as well as given an official IMAX poster that features an up close and personal look at what looks to be a significantly-telling shield from the medieval period of the movie.

Let’s take a look at the poster, starting at the top. If you look closely, you can see a planet being destroyed or swallowed if you will, which could highly be indicating the arrival of Unicorn, the planet eating Transformer. Some have been theorizing that it could mean Cybertron finally coming towards Earth since the trailers have hinted that The Last Knight will reveal why Transformers have continued to return to Earth for centuries. Below that is an image of Earth and directly below that is the three-headed dragon we’ve seen very little of in the trailers. That Transformer is called Dragonstorm, and he’s a Cybertronian Knight. Now the question is if he’ll only be a part of the medieval period or play out in the present day events as well. Finally, just below Dragonstorm is a an army of Transformers (both Autobot and Decepticon). It would make sense if the Transformers will swords were Megatron and Optimus Prime as they’ve been at war for years, but could it mean something much more? Just as the tagline says, every legend hides a secret.

Let us know your thoughts on all the new posters! Also, did I miss anything in the IMAX poster? Is there something you see that I don’t? Which Transformer are you looking forward to seeing the most? Transformers: The Last Knight hits theaters on June 23rd, 2017.