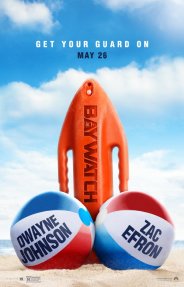 As far as 2017 goes, Baywatch may be the biggest R-rated comedy this year features. It’s not only a big screen remake of the classic ’90s TV show, but it stars a bunch of big names like Dwayne ‘The Rock’ Johnson, Zac Efron, and Alexandra Daddario. So far, in my opinion, the trailers have been average, both with moments to love and moments that don’t crack a smile as much as others. Today, a new trailer has been released for the raunchy take on the sexy beach bods, which features a ton a new footage.

The story follows a new hotshot lifeguard (Efron) as he butts heads with the badass and universally loved head lifeguard of Baywatch, Mitch Buchannon (Johnson), until mysterious activities start to arise at a local beach club, leading Mitch and his team to come together and save the beach. As much as I hate to say it, this new trailer had me feeling like this is more of an action movie than a comedy. There’s a few comedic moments, sure, but none of them did anything more than crack a smile for me. And it’s pretty disappointing.

When this movie was announced and the casting was revealed, I was stoked because on paper, it looked like a lock of a comedy. Johnson, Efron, and Daddario have all proven themselves in comedies before and they’ve been surrounded by enough Baywatch-ness to give it that look and feel they were going for, just with a very modern day take. And hopefully, these trailers don’t reflect the movie and it turns out to be ridiculously outrageous and hilarious. But for now, my expectations are tempered a bit just because the trailers haven’t blow me away, by any means.

Check out the new trailer and after doing so, let us know your thoughts in the comments below. Have you been looking forward to the Baywatch remake? What does this trailer do for your expectations? Good or bad? Seth Gordon’s Baywatch hits theaters on May 26th, 2017 and stars Dwayne Johnson, Zac Efron, Alexandra Daddario, Kelly Rohrbach, Ilfenesh Hadera, Jon Bass, and Priyanka Chopra.