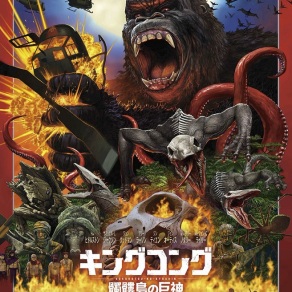 March 2017 is looking like one of the biggest months of the past few years. The month opens with a little movie called Logan and finishes with the long-awaited big screen adaptation of Ghost in the Shell. Then you throw in Beauty and the Beast, Power Rangers, and our main topic of Kong: Skull Island, how is that even possible? Each week features a massive movie, with Skull Island being the second biggest movie next month (I mean, Logan, come on…).

Anyway, from the moment we saw its first footage last year at Comic Con, Kong: Skull Island has looked like the monster movie we’ve been waiting for after the awesome (rebooted) introduction from Gareth Edwards’ Godzilla. Starting with a phenomenal cast, then followed by a gigantic Kong himself, Jordan Vogt-Robert’s film is poised to be one of this years most exciting and box-office crushing movies.

But how good will it be? All indications point towards great, and that continues with its latest batch of marketing promos. The first clip for the movie has been released, which focuses on one of the more memorable scenes from the trailers, where John Goodman says that strong line: “monsters exist.” Plus, you throw a little Samuel L. Jackson in there and it becomes something else.

Check it out below, which is also followed by the most recent TV spots that have been airing for the last week or so. How pumped are you for Skull Island? What excites you the most about it? Is there anything holding you back? Jordan Vogt-Roberts’ Kong: Skull Island hits theaters March 10th, 2017 and stars Tom Hiddleston, Brie Larson, Samuel L. Jackson, John Goodman, Toby Kebbell, John Ortiz, and John C. Reilly.