Watch the First Trailer for James Franco’s ‘In Dubious Battle’ 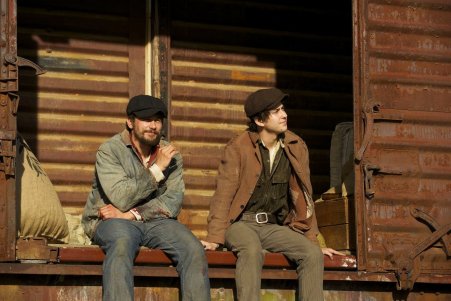 To most, James Franco is known as a comedy genius, with many hits over the years. To a select few, while his comedy chops always come first, he’s also known for his work as a dramatic actor and director. The latter has been lesser known out of the three, but as of more recently, Franco has been starting to put his hands on bigger projects, with his latest receiving its first trailer.

His new film, titled In Dubious Battle, follows a group of migratory workers in California as they take on the apple country landowners. I hadn’t heard anything about In Dubious Battle until its trailer was released yesterday, and while it doesn’t have a big, blockbuster type feel, it seems like a great story on a small enough scale for Franco to tell and get his foot in the door. I’m not buzzing after watching it by any means, but the trailer definitely got me interested. And it’s hard to not mention that I got a few good surprises while watching the trailer as actor after actor popped up, resulting in a truly incredible cast.

Check out the first trailer below and after doing so, head down to the comments and let us know your thoughts. What did you think? Does it look interesting? Or are you not a Franco fan? In Dubious Battle has a limited release date of February 17th, 2017 and stars James Franco, Nat Wolff, Vincent D’Onofrio, Selena Gomez, Ed Harris, Josh Hutchinson, Sam Shepard, Zach Braff, Robert Duvall, and Bryan Cranston.

In the California apple country, nine hundred migratory workers rise up “in dubious battle” against the landowners. The group takes on a life of its own—stronger than its individual members and more frightening. Led by the doomed Jim Nolan, the strike is founded on his tragic idealism—on the “courage never to submit or yield.”