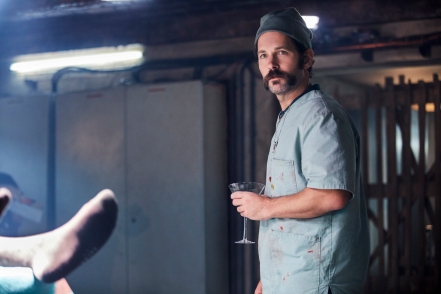 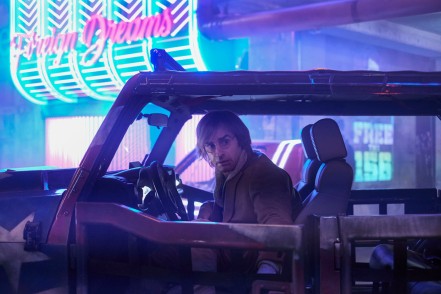 The first images for Duncan Jones’ upcoming sci-fi thriller Mute have been released. Mute acts as the director’s Warcraft follow-up, and from the look of the new images, it will be a far different film from the filmmaker’s most recent fantasy adventure.

After crushing his first two films in Moon and Source Code, Jones made his blockbuster debut this past summer with the video game adaptation of Warcraft. And although it was received to mixed reviews, from both fans and critics, the future of Jones as a director has always been bright. Enter Mute. Jones has been working on the sci-fi thriller for quite a long time now. The film takes place in 2052 in Berlin and stars Alexander Skarsgard as a mute bartender who, after a childhood accident, lost his ability to speak. But when his girlfriend disappears, he sets out on what’s being called “a noir-ish quest to find her, diving deep into the city’s seedy, neon underworld.” Paul Rudd and Justin Theroux star alongside Skarsgard as a pair of American surgeons.

When you first glance at the new images, it’s pretty clear that this film is a sci-fi thriller with very strong noir elements, the neon is the eye-popping giveaway there. Being the type of film Jones is setting out to make, I would not be surprised to learn that his inspiration behind the film is the sci-fi classic Blade 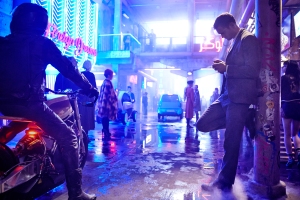 As far as Jones, in no way does Warcraft make me think twice about his filmmaking abilities. Source Code features a story and characters that continuously keep you on your toes and Moon, it’s the kind of film that only comes around every few years. I’ve even considered putting it in my Top 10 of All-Time once or twice. Warcraft held good elements within itself, but just as we’ve seen time and time again, the video game genre is nearly impossible to tackle. But with Mute, Jones is looking to get back on track, and these first images are a fascinating start.

How about you? What do you think about the images and the films description? Were you a fan of Warcraft? Jones as a director? Jones’ Mute will be released some time in 2017 and stars Alexander Skarsgard, Paul Rudd, Justin Theroux, and Sam Rockwell.