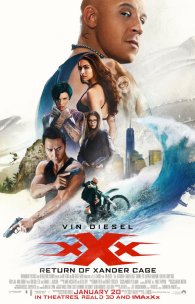 In the new clip for this movie that follows, Diesel’s Cage takes the sport of skiing to a whole new level. Not that he ski’s differently or anything, but instead of using snow, he’s riding through the rough terrain of the jungle…yeah. Check out the new clip below, as well as its official b-roll footage, and let us know your thoughts in the comments. How are you feeling about Xander Cage’s return? D.J. Caruso’s xXx: Return of Xander Cagerides into theaters on January 20th, 2017 and stars Vin Diesel, Ruby Rose, Nina Dobrev, Toni Collette, Donnie Yen, Tony Jaa, Deepika Padukone, and Samuel L. Jackson.

Focuses on extreme athlete turned government operative Xander Cage (Vin Diesel) coming out of self-imposed exile and on a collision course with deadly alpha warrior Xiang and his team in a race to recover a sinister and seemingly unstoppable weapon known as Pandora’s Box. Recruiting an all-new group of thrill-seeking cohorts, Xander finds himself enmeshed in a deadly conspiracy that points to collusion at the highest levels of world governments.