Gareth Edwards’ Rogue One is still a handful of weeks away, then Rian Johnson’s Episode VIII next year, yet all the talk as of late has been revolving around Phil Lord and Chris Miller’s young Han Solo spinoff. News arrived late last week that Emilia Clarke, of Game of Thrones fame, had been cast as the 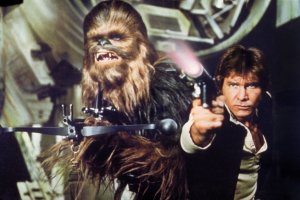 female lead. Now, although it’s been expected, we have news on what type of film we’ll be seeing Han and Chewie play in come 2018.

With Rogue One getting closer and closer, this week was dedicated to everything Star Wars. The biggest magazines (from Entertainment Weekly to Empire) revealed their issues that focus solely on the galaxy far, far away, with some revealing interesting new details on the forever franchise. Over the next few days we’ll have a few posts chronicling stories from Josh Trank’s Boba Fett spinoff to Lucafilm’s plans after Episode IX, as for this one, it’s all about the scruffy looking nerf-herder and his next adventure.

While speaking with Variety about everything Star Wars, Lucafilm head and Star Wars brain-trust member Kathleen Kennedy revealed the kind of film they’ll be going for:

“This moves closer to a heist or Western type feel,” says Kennedy. “We’ve talked about [Frederic] Remington and those primary colors that are used in his paintings defining the look and feel of the film.”

The “heist or Western type feel” is something I’ve always thought would be a Han Solo movie, that’s the type of character is. What’s interesting is the look they want, which is the work of Frederic Remington. Some of his paintings are below, but it has a very much old school Western look of the ’60s and ’70s. And while you may be shaking your in head in confusion, I’m actually quite interested in Lord and Miller attempting a Star Wars film like that.

The saga films aka the Skywalker story all stay the same, and for good reason. But next month’s Rogue One, it’s something we’ve never seen in this universe before. It features Darth Vader, yes, but it’s a straight war film, like Black Hawk Down or Spielberg’s Savin Private Ryan. And if Kennedy is right and they are going for this type of feel and look for the Han Solo movie, it proves that Lucafilm is trying their best to make each film drastically different from the last, especially the spinoffs.

Han Solo is one of my favorite, if not my favorite Star Wars character. Always has been. I loved the idea of giving him his own movie, seeing him before his introduction in Episode IV. Where did this guy come from? What has he done? How did he become best friends with a walking carpet? But at the same time, I questioned it because of how absolutely big the galaxy of Star Wars is. Sure, it might keep the universe contained for now, creating a brand new story about a character we’ve seen in four movies already. But that same story might feature something we’ve never seen or heard of that could eventually be told in its now spinoff, say the world of smuggling or the underworld of Star Wars?

Either way, I continue to be very excited for this spinoff, for the reason above and because of everyone involved (Donald Glover as Lando? Beyond perfect). Sure, I do have my reason to be nervous, but who doesn’t? Phil Lord and Chris Miller’s untitled Han Solo spinoff has a May 25th, 2018 release date and stars Alden Ehrenreich, Donald Glover, and Emilia Clarke.