The Claws Are Out in the Latest ‘Logan’ Image

From the moment the official teaser poster for Logan was released, it’s been the film of early 2017 that has everyone talking, and that’s not just due to that fantastic first trailer. Director James Mangold, and the official Instagram account for the film, have steadily been releasing new images, some very telling and others just being incredible new looks.  While Logan‘s latest image doesn’t reveal anything major, it does still have a very specific story its telling.

Just as all the previous images, this new image is in black and white, which has been insanely smart to do from the beginning. Before the trailer was released, the images were so good that many, including myself, 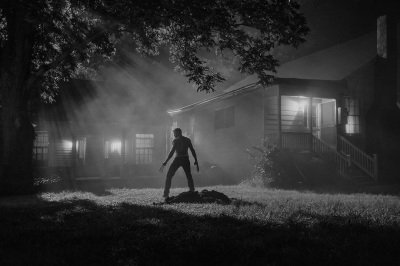 believed there was a good chance the film could actually be black and white. While that unfortunately isn’t the case, having the images still be that way is still very much a beautiful thing to see.

As for what the images shows, what kind of story it tells, there’s one major aspect. The trailer doesn’t give off this vibe at all, but Logan is still very much a comic book movie. And one thing superhero movies of the past have never featured is the element of horror. When I look at this image, I instantly think of horror o old, like Halloween and the original Friday the 13th. It gives off a very eerie vibe, a vibe I’m extremely excited to see not just because it’s about Wolverine, but because it’s a superhero film. When did we ever think we’d say superhero and horror in the same sentence?

Now that you’ve heard my thoughts, let us know your yours in the comments below. How much did you like the first trailer? What about the images and its black and white feature? James Mangold’s Logan slices its way into theaters on March 3rd, 2017 and stars Hugh Jackman, Patrick Stewart, Boyd Holbrook, Richard E. Grant, Stephen Merchant, and Elizabeth Rodriguez.