Final ‘Fantastic Beasts and Where to Find Them’ Trailer: The New Wizarding World 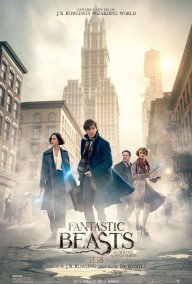 Warner Bros. has unveiled the final trailer for their upcoming return to J.K. Rowling’s wizarding world, Fantastic Beasts and Where to Find Them, and this is easily the best look at the film to this point. For those few who are unaware, the film takes place in the same universe as Harry Potter, just 70 plus years prior to those events. Rowling herself makes her screenwriting debut for the 1920s America set film with David Yates returning to the wizarding world after helming the final four Harry Potter movies. Eddie Redmayne stars as Newt Scamander, a magi zoologist who finds himself running up against magicians in hiding and a government on its toes after part of his collection of some of the world’s most spectacular magical creatures escape on the streets of New York.

Previous trailers have showcased the wonders of this new wizarding world cooked up by J.K. Rowling and company. But now with the film getting closer, visual effects are nearing its completion, giving Warner Bros. and the marketing team a much bigger opportunity to show us the film they intend on giving us in November. As far as that goes, it a damn beautiful trailer. Just as the Harry Potter franchise did, Fantastic Beasts looks to create a world that every audience member can jump into and be a part of, in more ways than one. At the same time, it’s clearly trying to separate itself from Potter and his friends, just as other franchise spinoffs have done in the past.

With Yates in the director’s chair, and keeping in mind the total success he delivered on the final four HP films, Fantastic Beasts almost seems destined to be an instant hit. Sure, it may not make as much money or Newt Scamander may not become such as legend as Harry Potter, but the film looks incredible. Pun being intended, it looks to capture the magic that Harry Potter showcased for more than a decade.

Check out the brand new trailer for the film below and let us know your thoughts in the comments. Are you a Harry Potter fan? How interested are you in Fantastic Beasts? What have you thought about the trailers? This trailer? David Yates’ Fantastic Beasts and Where to Find Them hits theaters November 18th, 2016 and stars Eddie Redmayne, Katherine Waterston, Alison Sudol, Dan Fogler, Colin Farrell, Ezra Miller, Samantha Morton, Ron Perlman, and Jon Voight.