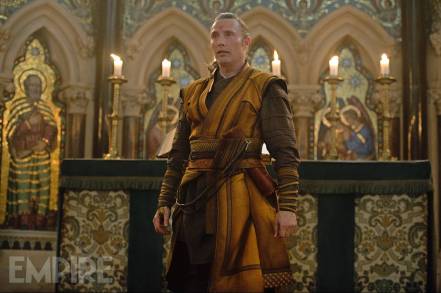 With October just a week away, that means our lack of the Marvel Cinematic Universe is almost over. Doctor Strange, the newest character to join the ranks of the MCU, is set to open in early November and open up an entire new side of the universe. The mystical side of these movies will be something completely new for fans, and something very different from what fans have come to expect from the most recent MCU entries (Captain America: Civil War, Ant-Man, and Avengers: Age of Ultron).

With the release of the Sorcerer Supreme inching closer and closer by the day, the final stages or marketing have began to kick in for the Scott Derrickson directed film. To this point, understandably, most of the marketing has focused on its stars Benedict Cumberbatch, as it’s his story we’ll be following. We’ve also gotten looks at Chiwetel Ejiofor’s Baron Mordo, Tilda Swinton’s The Ancient One, and even a bit of Mads Mikkelsen’s villainous Kaecilius. One major piece of the cast has been quite absent thus far, Rachel McAdams’ Christine Palmer. Lucky for us, the latter two are the focus of two new images, thanks to Empire Magazine.

When it was first announce that McAdams was cast in the film, I think we were all hoping it was a role that would overlap into multiple movies in the MCU. While that still may be the case, footage has hinted that her character will not just be a possible love interest for Strange, but the audience’s eyes as we follow her as she learns who Steven Strange becomes. As for the image, it seems like it’s post-sorcering. The footage of Strange and Palmer doesn’t feature Strange with grey bits of hair, whereas this new image does, suggesting this is a meeting (possibly the first) between the two following Strange’s return from training in the mystical arts. Whether or not McAdams’ role turns out to be a romantic one for our lead or something else entirely, hopefully the role is substantial enough to where we see her in many more Marvel movies going forward.

Take a look at the two new images above and four of the latest TV spots for the film below. How excited are you for Doctor Strange? Do you know anything about the character? Does not knowing attract you to it more? Scott Derrickson’s Doctor Strange hits theaters on November 4th, 2016 and stars Benedict Cumberbatch, Chiwetel Ejiofor, Rachel McAdams, Benedict Wong, Mads Mikkelsen, and Tilda Swinton.