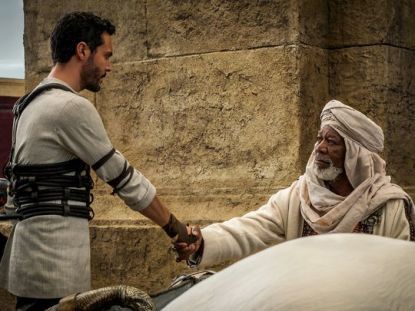 Remakes are a tough task these days. If you’ve involved in a remake, you’re either being showered with love because it’s a property that’s long overdue for one, or being bashed by diehard fans because they believe it’s a property that should never be touched. I for one am totally okay with remakes, for the most part. Let’s face it, most films will be remade at some point in time because of the property value, but to me, Ben-Hur is not one of those properties.

Sure, I’ll be going into 2016s version of this story with an open mind and hopefully, hopefully walking out at least mildly satisfied with what I just watched. But putting that aside for a second, the original, Charlton Heston led Ben-Hur from 1959 is an untouchable movie. To me, that movie is a historical masterpiece. It captures everything it set out to do and more. And sure, the remake looks like it has some sweet ass action and a cool, almost Fast & Furious style chariot race, but that’s not Ben-Hur. It’s not about the visuals or big set pieces, it’s about the story. If you haven’t watched the original Ben-Hur, I highly recommend doing so after you check out the remake this weekend, if you plan on doing so. You’ll see what I’m talking about. It’s old school filmmaking in the best way. It’s a classic that will forever go down in Hollywood’s books.

Anyway, being set for release this weekend, Paramount has been dialing up the marketing for Ben-Hur as of late with a number of new videos; clips, featurettes, TV spots, etc. As has been with the entire marketing so far, it mainly focuses on the climax of the film where the world famous chariot race takes place. Take a look at all the new videos below and let us know your thoughts in the comments below. Have you see the original? Are you looking forward to the remake? What are your expectations? Timur Bekmambetov’s Ben-Hur rides into theaters August 19th, 2016 and stars Jack Huston, Toby Kebbell, Gal Gadot, Rodrigo Santoro, and Morgan Freeman.