‘Suicide Squad’ (Written) Review: What’s Not to Like About These Bad Guys?

This review comes after watching Suicide Squad for a second time this weekend. During my initial review, which you can check out on the weekly podcast for Apocaflix Movies!, I talked about how the film wasn’t quite the hit I was expecting it to be. I thought the marketing for Suicide Squad is one of the genre’s best. However, the end result didn’t live up to my high expectations.

Bottom line is that through all the negatives, I still had quite a bit of fun watching this film. Suicide Squad offers plenty of action, fun character moments, a few deep character moments, humorous dialogue between characters, along with incredible performances from a very diverse cast playing lesser known comic book characters.

From here on out, I’ll try and focus on things I took away from my second (and third) viewing of the film, while trying to stay on the positives. It all starts with the Amanda Waller character played fiercely by Viola Davis. This woman is all the motivation these bad guys need, because if they don’t do what she asks, then she will kill them is the most unmerciful way possible.

The character introductions of Task Force X happen through her proposal to make these bad guys do something good for once in their lives. Each introduction features fun music mixed into a flashback sequence that shows off the character’s abilities and explains how they were captured. What makes this first act so awesome are the cameos that are brilliantly featured. Batman is not the murdering vigilante he was in Batman v Superman. Instead, he’s reasoning with Deadshot (Will Smith) during their scuffle to not make a violent scene in front of his daughter. Then there’s The Flash (Ezra Miller), who makes a cool cameo during Captain Boomerang’s (Jai Courtney) heist. Its all fan service in a film that director David Ayer continues to insist is for the die hard DC fans.

The time given for each main character’s backstory is unbalanced, with Deadshot and especially Harley Quinn (Margot Robbie) getting the most. We actually get to see Harley’s origins, as a former psychiatrist who falls for The Joker (Jared Leto), and in time becomes just as crazy as he does. As a fan of the character, it was awesome seeing her come to life. The scene known as “The Chemical Wedding” where Harley vows to live for The Joker was so perfect. From the music, to the dialogue, to the chemistry between the two. Throughout the film, every time both Joker and Harley were onscreen, it was nothing short of greatness. Margot Robbie deserves all the credit in the world for pulling off the Harley Quinn character so brilliantly. She was crazy, funny, dangerous, and very sexy.

As for Jared Leto‘s take on The Joker, it was exactly what I expected. Ayer took inspiration from real life drug lords, and both him and Leto gave us the underground psychopathic gangster. Comparing Leto to Heath Ledger is just silly, because this Joker isn’t given nearly as much screen time or story focus. In fact, I think the objective was to serve the fans (because you can’t have Harley without Joker), and to also get audiences to buy into this new version, potentially setting up a bigger role for him down the road. Last thing I’ll say about the Joker is how much I appreciated seeing a different version of the character. This is someone who’s actually in love with another person, and while his relationship with Harley is insane and especially unhealthy, its also addicting to watch.

For all the problems one might have regarding the mission Task Force X is sent on, it does have its moments of awesomeness. Before talking about Deadshot’s standout action sequence, I’ll quickly praise Will Smith. The actor had a certain fire in him that I haven’t seen in a long time. He made the Floyd Lawton character very cool, witty, extremely dangerous, but also compassionate when it came to his daughter. I have to highlight the back and forth conversations between him and Rick Flag (Joel Kinnaman), which were at times hilarious. Both men hate each other for who they are, but in time begin to grow a level of respect. Deadshot later shows off his lethal skills in a one-sided firefight when Rick and his soldiers become overwhelmed by these faceless threats. Its one of the film’s best action sequences, and puts Smith in the spotlight, doing what he’s done as an action star for decades. 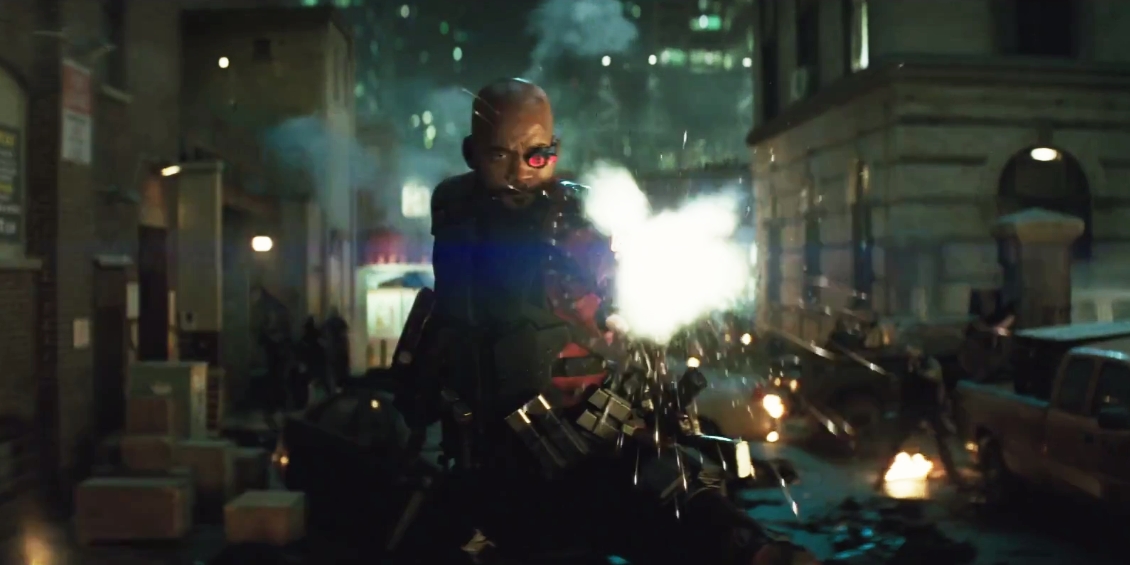 Not everyone gets to show off their powers and/or abilities to the fullest. Killer Croc (Adewale Akinnuoye-Agbaje) is a background character who occasionally gets a moment onscreen to show his enhanced strength. He has some of the film’s funniest one-liners, but nothing else after that. I would’ve liked a bit more backstroy. Captain Boomerang became one of the more like-able characters, thanks to an impressive performance by Jai Courtney. His comedic timing makes me want to see him reprise his role in the upcoming Flash solo-movie. Katana (Karen Fukuhara) was the silent assassin, who lets her sword do the talking. The moment where she’s speaking with her husband’s soul before the final battle felt out of place. I felt like more could’ve been done with that element. I didn’t even want to mention Slipknot (Adam Beach) in this post, other than I think we all knew he would bite the dust.

However, one character who nobody thought would steal the show is El Diablo (Jay Hearnandez). Throughout the film, Diablo continued to stay away from the fight without much reasons as to why?  But when he’s sitting at the bar, explaining his tragic backstory in one of the stronger scenes in the film, we suddenly care more about the character. To top it off, he goes “beast mode” in the final battle, and gives audiences one of the coolest fight scenes, because we’re all now rooting for him.

Lastly, there’s June Moon a.k.a. The Enchantress played by Cara Delevinge. June mainly serves as a motivation for Rick Flag to do whatever Amanda Waller asks. The only reason I bought into June and Rick’s relationship is because of how Amanda manipulated it all, thus making her even more unlikable (in a good way). As for The Enchantress, her motivations to destroy the world are as thin as Katana’s sword. She spends a majority of the time in front of the portal with the trash in the sky. She even does this weird dancing that just takes you out of the movie.

What I’ll say about her powers is how effective they were used at showing what some of the Task Force members truly desired. For example, Harley wanted a normal, happy life with the Joker and to have kids, while Deadshot wanted the Bat dead. As a result, I felt I grew closer to the characters. The climactic battle gets a little out of hand, but it does have some redeeming moments, like Diablo’s epic fight and Harley tricking the Enchantress and cutting out her heart. At this point I’m really loving Harley, so seeing her slice the Enchantress was awesome.

So in the end, Suicide Squad didn’t live up to my high expectations set by the excellent marketing. When taking a hard look at the film overall, it suffers from missing/incomplete scenes, key moments between certain characters that don’t feel as earned, and a third act that struggles to stay on par with the first two.

However, I had a lot of fun watching these characters onscreen. The performances were all excellent, with Will Smith, Margot Robbie, and Viola Davis as the standouts. I’m invested in these characters, and look forward to seeing where they go next. The action scenes, while inconsistent as far as quality goes, are fun to watch and prove that Ayer had a unique vision for these characters. The music in the film was used exceptionally well, fitting to each character and moment, and the soundtrack is dangerously addictive.

I love this movie, and cannot express how much fun I had watching it. I encourage people to check it out, and try and have fun. The DC extended universe needed this type of film, and while its not the big hit we expected, it proved there’s a lighter side to the universe.