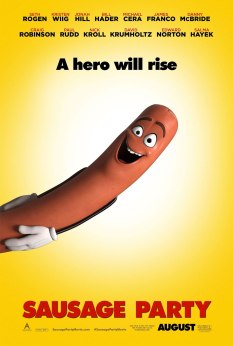 If you’re a parent hoping an animated movie is coming down the pipeline somewhat soon, Sausage Party is not the movie you’re looking for. From the minds of such as This Is the End and The Interview, Sausage Party stars an incredible cast of voices in what is being made out to be one of the funniest and raunchiest comedies of the year. And while I’m trying my best to stay away from any new footage because I want all the laughs for the theater, I just couldn’t help myself from checking out these newly released clips.

All three of the following clips star Seth Rogen’s hot dog and Kristen Wiig’s bun, as they maneuver their way through the jungle of the grocery store, meeting a ton of different foodie characters along the way. Although I’ve become a bit anti-Seth Rogen lately, mainly because his kind of comedy is getting old, I’ve been on board with Sausage Party from the moment I saw the first trailer. Not only does it look outrageous and just full of absolutely chaos, but it isn’t holding back and what it promises to be. An adult, R-rated, raunchy animated comedy. Now the only thing I’m hoping for is that the trailers and footage I’ve seen aren’t the best parts of the movie. Hopefully they’ve held quite a bit back, saving some of the best moments for the theater.

Check out the new clips below. How excited are you for Sausage Party? Do you like the voice talent they recruited? Is it your type of comedy? Sausage Party opens August 12th, 2016 and stars the voices of Seth Rogen, Kristen Wiig, Jonah Hill, Bill Hader, Michael Cera, James Franco, Dnany McBride, Craig Robinson, Paul Rudd, Nick Kroll, David Krumholtz, Edward Norton, and Salma Hayek.