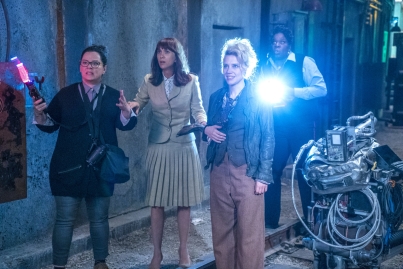 I think we can all agree that Paul Feig’s Ghostbusters reboot hasn’t had the smoothest road to its release. Although I very much like the idea of an all-female team, many people and, of course, hardcore fans shook their heads at the idea. And by the time all the nonsense was washed away, the first trailer was released, which as you know, was declared the most disliked trailer on YouTube. Sure, they haven’t really helped themselves out since then with other trailers and marketing, but we’ve seen this before. The most recent to come to mind is Edge of Tomorrow. Remember the hate that marketing was getting? Look how that badass of a movie turned out. What I’m getting at is that no matter how bad or even just okay a trailer or marketing run is, you just never know with the full, final product.

Am I looking forward to Ghostbusters as much as I should be for a mid-July release? Probably not. I think the best word to describe it is I’m interested in what Paul Feig and company have put together. I haven’t love or even liked the trailers we’ve received, but I, for the most part, really like the leading ladies and have enjoyed Paul Feig more than half the time. And with the embargo being lifted Sunday night, I was able to catch some non-spoiler reviews of critics I trust, who surprisingly walked out satisfied with the movie. Now I’m not saying my mind is changed or that I’m now excited for it, but it does give me some hope that everything I’ve seen has just been substantially misleading to the final feature.

Now because I was quite disappointed with the first two trailers for the movie, I pretty much gave up on watching any newly released Ghostbusters footage, aside from the occasional TV spot during my nightly shows. But that doesn’t mean I must stop giving what the people want. So to not just get fans excited for the release of the reboot, but to also possibly turn some around, a load of new clips and spots have been released teasing movie-goers of what’s to come this weekend.

Take a look at all the new footage below. And after checking it out, I want to know your thoughts on the reboot before and after all the footage? Are you excited for it? Do you like the team of ladies they’ve assembled? Sound off below! Paul Feig’s Ghostbusters hits theaters July 15th, 2016 and stars Melissa McCarthy, Kristen Wiig, Kate McKinnon, Leslie Jones, and Chris Hemsworth.