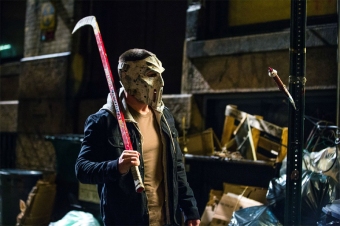 2014s Teenage Mutant Ninja Turtles may not have been universally loved, but it didn’t completely disappoint like many were anticipating either. While it may not have been the TMNT movie that fans have longed for, it did a decent enough job of setting up characters and a world that can be built upon in future installments. Making close to $200 million domestically and within shouting distance of $500 million worldwide, Teenage Mutant Ninja Turtles can definitely be considered a success on that front, which, of course, resulted in a sequel.

I’ll be honest, I wasn’t clamoring for a sequel in this franchise. I never read the comic books or watched any animated series growing up, so I wasn’t attached to this franchise like some may be. But the moment I read the news that Arrow star Stephen Amell was jumping on board as Casey Jones, I was instantly hooked. And that hook has continued through all the footage we’ve seen so far. Sure, it’s a bit over the top and loaded with CGI, but this isn’t a Oscar contender, it’s a summer blockbuster franchise that’s suppose to satisfy fans with sheer popcorn fun. Now if you go in with that kind of thinking, I have no doubt you’ll walk out entertained with what you get. How do I know this? That’s how I went in to the original and walked out that same exact way.

Like I had mentioned above, the casting of Casey Jones is what turned the tide for me on this sequel, as the character is a huge part of the Turtles and their world. He is easily the most exciting aspect of the film going in for me, mainly because Stephen Amell is one of my favorite actors working as Arrow is one of my top TV shows currently running. So yes, it’s safe to say I’m excited. I’m pumped to see this character get into the action with his hockey equipment and fight alongside the Turtles. Now if you aren’t familiar with the character, the following clip features his Out of the Shadows introduction:

Teenage Mutant Ninja Turtles: Out of the Shadows is now under a month away with a June 3rd release date, which means its marketing will be leveled up a bit in the coming weeks. I’m not sure how much new footage will be released, hopefully not much, but expect to see TV spot after TV spot, beginning with the most recent ones below.