After quite a long wait, we finally have our first look at the highly anticipated remake of The Magnificent Seven. Sony Pictures is behind the remake, with Antoine Fuqua in the director’s chair and a star-studded cast led by Denzel Washington Chris Pratt, and Ethan Hawke. Get your first look at the cast saddling up for Fuqua’s modern retelling below.

It was also revealed alongside these first images that the first official trailer for the movie will be debuting tomorrow. As for the characters these guys are playing, USA Today dropped some details with the first look images:

Check out the batch of images below and make sure to come back tomorrow as we’ll have the first trailer as soon as it becomes available. As for the images, what do you think of the old west look these guys are rocking? How excited are you to see this group of fellas ride together? Have you seen the original? The Magnificent Seven rides into theaters September 23rd, 2016 and also stars Hayley Bennett, Vincent D’Onofrio, Matt Bomer, and Peter Sarsgaard. 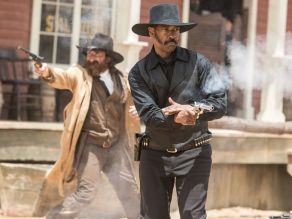