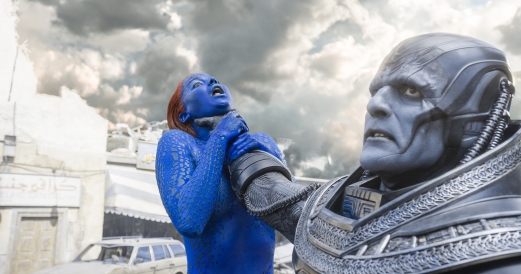 The marketing for X-Men: Apocalypse has struggled to stay ahead of its fellow comic book blockbusters. Through two full trailers and batches of images and posters, the film currently remains an afterthought. I find myself thinking more and more about Captain America: Civil War and Suicide Squad, than X-Men: Apocalypse. Its somewhat alarming for me, considering how long I’ve been waiting to see the Apocalypse character (Oscar Isaac).

As cool as the costume designs look and as promising as the new young actors seem, these trailers have felt underwhelming. A part of it goes towards the amount of comic book movies currently being marketed. There’s more competition, and when the competition is delivering something fresh with style, those who aren’t will standout. So what will Fox do to make sure audiences are talking more about X-Men: Apocalypse? They will use that Hugh Jackman/Wolverine card in their back pockets!

Heroic Hollywood is hearing that the upcoming (and possibly final) trailer for X-Men: Apocalypse will include Wolverine. Up until this rumor, there has been no official hints of the character appearing in the film. However, that was likely misdirection that would’ve setup an awesome cameo. Now it looks like that cameo will be spoiled, and that’s kind of unfortunate for Fox.

There’s a reason the marketing for X-Men: Apocalypse has yet to show Wolverine. The studio wants to sell the idea of a franchise moving forward without its biggest star. We’ve seen plenty of Jennifer Lawrence as Mystique, and numerous shots of the new cast playing younger versions of the main characters (Cyclops, Jean Grey, Storm, etc). I’m looking forward to seeing these young actors/actresses take on these characters, but that was never a concern.

One day, Fox will be making X-Men movies without Hugh Jackman. Hopefully Apocalypse closes the universe that Singer started 16 years ago beautifully, and begins a new one just as awesome. Apocalypse has my money, but lets see if this upcoming trailer can get my excitement.