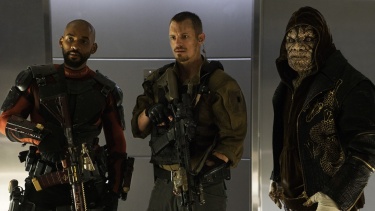 Just as they promised, Warner Bros. and David Ayer released a brand new trailer for their upcoming comic book movie Suicide Squad at the MTV Movie Awards this weekend. Although the movie is still a solid 5 months away, this is the third full-length trailer for the movie. Oh who am I kidding, do we really care how many of these we get? We are just eating footage up for the David Ayer film, a film that promises to be unlike any superhero movie we’ve seen to date.

The first trailer was a very dark intro into the look and feel of the movie, while the second trailer opened up and totally brought the action. As for the third, it still brings the action, but the main focus of it is the fun of it. With Batman v Superman being such a dark film, we didn’t really know how much “fun” Suicide Squad would be. Psh, that’s cleary out the window as this new trailer puts it front and center. And damn does it work. Although the second trailer is still my favorite of the bunch, it’s a complete and great trailer. And continuing the trend of awesome trailer music, having Sweet’s Ballroom Blitz play in the background made it that much more enjoyable.

Something worth mentioning. After watching the trailer a few times, it looks like we’ll be getting a ton more Batman than we first realized. All that footage may be from one sequence, but it sure seems like a lot. And after seeing Batman v Superman, it’s definitely not a complaint.

More fun. More Joker. And Batman! Watch the new trailer below and let us know what you think of it in the comments below. Did you enjoy it? What was your favorite part? Where does it rank out of the three trailers? David Ayer’s Suicide Squad hits theaters August 5th, 2016 and stars Will Smith, Jared Leto, Margot Robbie, Joel Kinnaman, Viola Davis, Jai Courtney, Cara Delevingne, Adewale Akinnuoye-Agbaje, and Scott Eastwood.