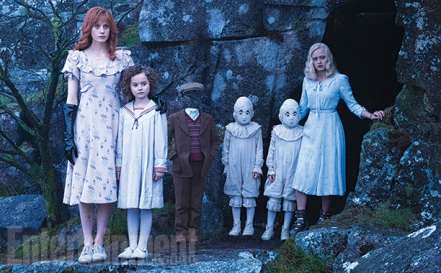 Entertainment Weekly has debuted the first official look at 20th Century Fox’s upcoming fantasy adventure Miss Peregrine’s Home for Peculiar Children. The movie is being directed by Tim Burton and stars Asa Butterfield as Jacob Portman, a teenager plagued by nightmares and on the advice of his therapist, goes to to visit his grandfather’s old home only find out it’s become a home for children with special powers known as Miss Peregrine’s Home for Peculiar Children.

Eva Green co-stars as the children’s magical guardian Miss Peregrine. As EW says, she’s “a shape-shifter known as an ymbryne” who “protects her charges (called peculiars) from hungry monsters known as hollows.” Director Tim Burton says “she’s like a scary Mary Poppins” who can “turn into a bird.” Now if you’re familiar with Green’s works or at least her incredible Showtime show Penny Dreadful, you know that this is exactly who Green is, this is the kind of work she excels at. And because Miss Peregrine sounds just as strange as some of her other properties, there’s room for her to be just as good as she is in those.

Also included in the EW reveal from the link I posted above are some details about some of the supporting characters we’ll see, such as Ella Purnell’s Emma who is said to be a romantic interest for Butterfield’s Jacob. Also included are “Olive (Lauren McCrostie), Bronwyn (Pixie Davies), Millard (Cameron King), the twins (Thomas and Joseph Odwell).”

While I’ve never really been the biggest fan of Burton and his directing style, I’m always interested in something that’s a bit outside the box. Not only that, but I’ve become quite a fan of Green as of late, mostly due to her fantastic work on Penny Dreadful. Here’s to hopefully the movie looks as interesting as it does now when its first trailer comes around. Miss Peregrine’s Home for Peculiar Children opens September 30th, 2016. 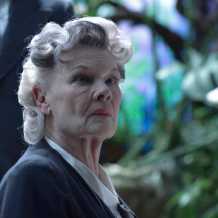 When Jake discovers clues to a mystery that spans different worlds and times, he finds a magical place known as Miss Peregrine’s Home for Peculiar Children. But the mystery and danger deepen as he gets to know the residents and learns about their special powers…and their powerful enemies. Ultimately, Jake discovers that only his own special “peculiarity” can save his new friends.