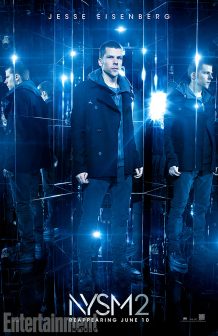 While many were a bit underwhelmed by 2014s Now You See Me, I walked away having quite a bit of fun with it. It was an exciting and thrilling movie that opened up a world that could span through multiple movies, which is exactly what I hoped would happen. And although it didn’t happen right away, a sequel and threequel were announced. The (pun intended) second act would bring back all the major players from the first with Lizzy Caplan replacing Isla Fisher as one of the horseman, which is a solid replacement.

The first trailer for the sequel was very much just a tease, showing us just how powerful the horseman have become since the last time we saw them. Other than that ninety seconds of footage, we’ve seen close to nothing on Now You See Me 2, which kind of fits the build if you really think about, with how good magicians never reveal their secrets and all. Anyway, we now have a new look at the movie from a set of character posters. While they don’t reveal anything new, they could be a hint that a first official (full-length) trailer for the movie could be arriving some time soon.

Take a look at the new posters both above and below and jump in the comments and let us know what you think. Did you enjoy Now You See Me? Are you looking forward to a sequel? What did you think of the teaser trailer?  Now You See Me 2 appears in theaters June 10th, 2016 and stars Mark Ruffalo, Jesse Eisenberg, Woody Harrelson, Dave Franco, Lizzy Caplan, Daniel Radcliffe, Michael Caine and Morgan Freeman. 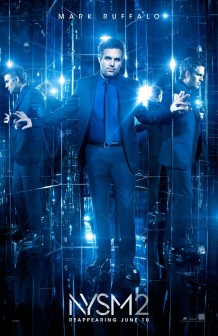 The Four Horseman (Jesse Eisenberg, Woody Harrelson, Dave Franco, Lizzy Caplan) return for a second mind-bending adventure, elevating the limits of stage illusion to new heights and taking them around the globe. One year after outwitting the FBI and winning the public’s adulation with their Robin Hood-style magic spectacles, the illusionists resurface for a comeback performance in hopes of exposing the unethical practices of a tech magnate. The man behind their vanishing act is none other than Walter Mabry (Daniel Radcliffe), a tech prodigy who threatens the Horsemen into pulling off their most impossible heist yet. Their only hope is to perform one last unprecedented stunt to clear their names and reveal the mastermind behind it all.