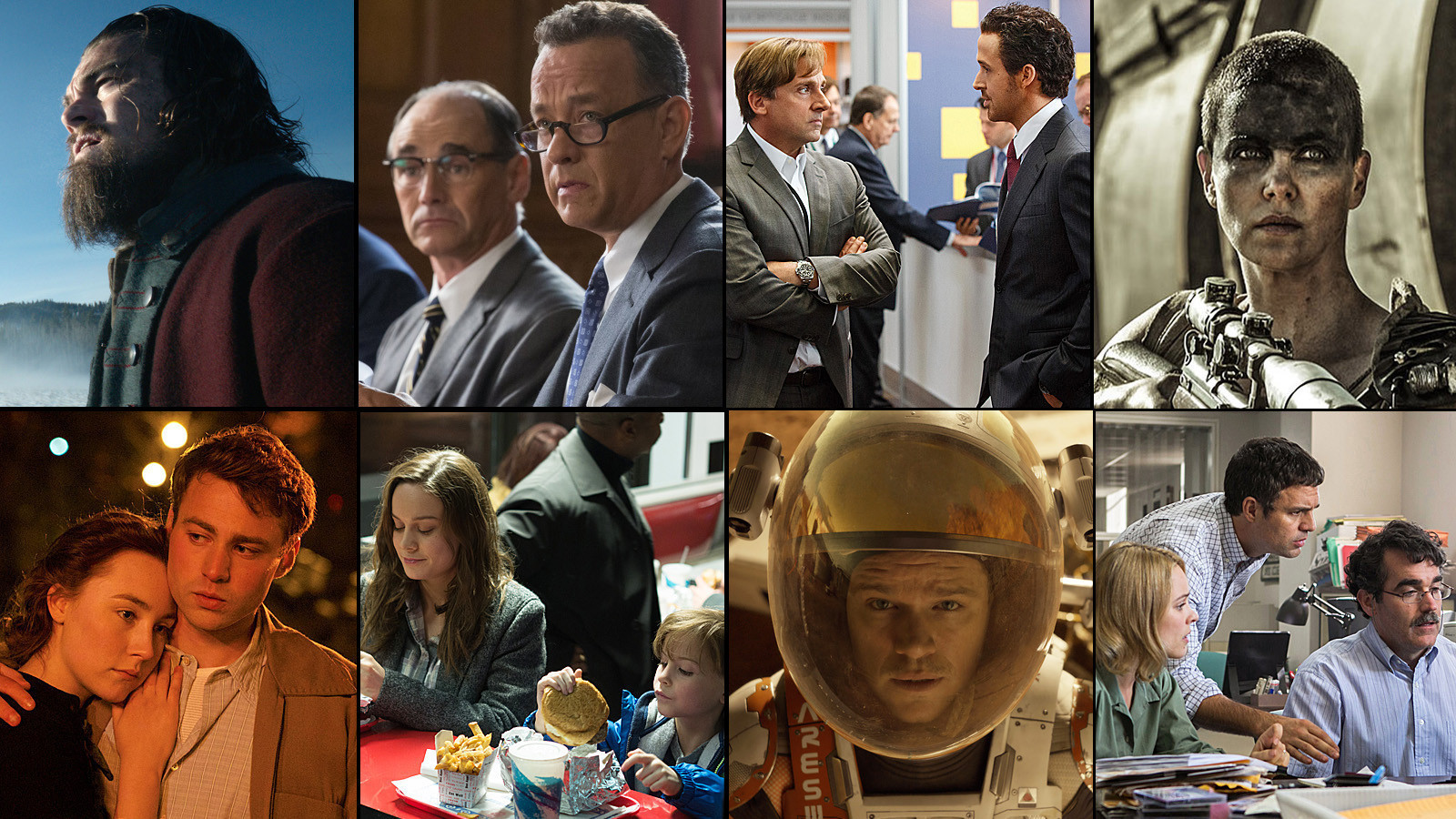 In the past month I’ve ranked some of the categories for this year’s upcoming Oscars, which will air on February 28th on ABC, including Best Director, Best Supporting Actor and Best Original Screenplay. Well now it’s time for the big one, arguably the most prestigious award given in the world of movies and certainly at the Academy Awards, and that is the category of Best Picture! Typically this is the easiest category to rank because it’s simple; put them in order based on which ones I enjoyed the most and thought were the best. However, this year it was a bit more difficult for me because after my top three I had a hard time ranking the rest of the movies since, in my opinion, they are all so close in level of quality. Nevertheless, I had to rank them so here’s my rankings for the Best Picture Nominations at this year’s Academy Awards.

Bridge of Spies is one of the movies on this list that is receiving a lot of hate. I’ve heard multiple people say that it should not be nominated for Best Picture and while I agree that it’s not one of the best eight films of the year, I still think it is a really well made film and is better than most people are giving it credit for. Of course having names like Spielberg and Hanks attached to it doesn’t hurt. I thoroughly enjoyed the movie but I have to admit that it probably has no shot at winning Best Picture, nor should it.

This might be the biggest shocker on this list! A lot of people consider The Revenant to be one of the favorites to win the category but I’ve got to admit that after sitting on the film for a while, it’s far less superior than some of the other movies that are nominated for Best Picture in my opinion. That doesn’t mean that I didn’t enjoy the movie, I did, I just think it could’ve been a lot better considering the director, the cast and the premise of the film.

I’ve explained how I feel about Mad Max: Fury Road many many times over the past six months or so but I’ll do it again shortly for this ranking list. I liked the movie, I think it’s a really good movie and a great action film. I have problems with it, such as lack of story and lack of Mad Max (Tom Hardy) dialogue, that prevent it from being the “masterpiece” that everyone else thinks it is. Does it deserve to get nominated for Best Picture? Considering the critical and fan response, sure. I just don’t see what most other people see when they watch this movie but that’s the great thing about film, everyone has a different perspective and taste which creates conversation and debate. Which is awesome! So ultimately I’m glad this movie is praised and nominated because I think it’s good for the movie industry overall and opens the door for other epic, blockbuster movies to get nominated for Best Picture.

I recently re-watched The Martian and it’s a lot better than I initially thought it was. After my first viewing of the film I thought it was good but not great by any means and with all of the praise it was getting, I was more inclined to talk about the negatives of the movie since most people were speaking positively of it. However, after watching it again it grew on me a little bit more and I was able to see the quality in it as well as understand why it could be nominated for Best Picture. A majority of the credit goes to Matt Damon, who carries this movie with his performance, and Ridley Scott, who directed Damon and was able to create an environment with one character for most of the movie and make it enjoyable to watch. The Martian wasn’t one of my personal favorites of 2015 but I completely understand why people love it and how it got a Best Picture nomination.

This is another movie that, after I first saw it, I wasn’t too impressed with it considering all of the buzz it was getting. I haven’t re-watched The Big Short since then but I have had time to think about it and it is arguably the most complex and difficult film to come out in 2015. Complex for general audiences to understand and difficult to write and direct and make it understandable for those audience members. What Adam McKay was able to do with this story while making it entertaining and somewhat easy to follow, compared to how hard it could’ve been to follow, goes to show how far he’s come as a director. McKay is not only a comedic genius but I think The Big Short has opened up the door for him to work on Oscar type movies and work with more dramatic actors going forward. Sometimes when judging the quality of something you have to consider the level of difficulty it took to accomplish it and for that reason alone I give The Big Short and Adam McKay this fourth spot on my rankings list.

If you really want to know why I have Brooklyn so high up on this list then read my review, the link is up above. I will reinstate some of the reasons why I enjoyed it so much for the sake of this article, however. I love period pieces and this movie captures the 1950’s brilliantly. I also appreciate a good love story in my movies, something that Hollywood has been lacking for decades in my opinion, and this movie told an exceptional love story that made me care about the characters’ relationship. I was shocked when I first heard that Brooklyn was nominated for Best Picture, I hadn’t seen it at the time, but I’m glad it did because it brought the movie to my attention and I ended up loving it. I do think it was one of the better films to come out in 2015 and it deserves the nomination in my opinion.

If you haven’t seen Spotlight then I highly recommend that you do so immediately after reading this article. It is a complete masterpiece and tells one of the most horrific true stories I’ve ever seen on film. Spotlight is a brilliantly crafted film as the tone, the pacing, the acting and the cast all come together to create at truly great piece of cinema. This might be the best movie to come out in 2015 but the movie I have at my number one spot on this list just happen to appeal to me more. I’ve seen Spotlight twice in theaters and it definitely holds up in a second viewing. I actually appreciated the movie more after seeing it a second time. I’m going to have a hard time believing any film other than Spotlight winning Best Picture at the Oscars, maybe The Big Short or maybe the next movie on this list, but in my opinion Spotlight is the favorite to win.

One of my favorite genre of film is dark, twisted, psychological thrillers and I consider Room a movie that falls under that categorization. The premise of the movie is incredible, if you don’t know it then watch the trailer, and when you throw in one of my favorite up-and-coming actresses in Brie Larson as the lead, then you have a film that is primed appeal to me. In my personal opinion, Room is a masterpiece and I give all the credit to director Lenny Abrahamson for creating a creepy environment, especially in the first half of the movie, and making the circumstances in the film believable. There’s sort of two parts to this movie, the before and after, and both of them work great together and compliment each other once the movie is finished. The best part of Room to me is the ending. I remember watching the movie and thinking, “Wow, if this movie ends strong, it’s going to be something really special.” The ending delivers very strong in my opinion and brings the story full circle while giving it closure as well. I can’t praise Room enough and I highly recommend it for people that are into these type of stories. I will say that it’s not for everyone but for people that have a similar taste as myself, I think you’ll love it.

Well there you have it! My rankings for the biggest category at the Oscars; Best Picture! I actually enjoyed all of these films and most of them do deserve their nomination. As far as movies that I think are missing from the Best Picture nominees, I think Ex Machina and Inside Out should have been nominated and I would take out Bridge of Spies and The Revenant. What about you movie lovers!? Do you agree with my rankings list? What movies do you think should’ve been nominated for Best Picture? Let us know in the comment section!

Check out my rankings for Best Original Screenplay here!

Check out my rankings for Best Supporting Actor here!

Check out my rankings for Best Director here!

Check out our site: ApocaflixMovies.com