One of this year’s biggest comedies is the return of one of the biggest franchises, Ghostbusters. The Sony Pictures and Paul Feig reboot/remake is a gender-swap from the originals, with the team now made up of all females. While we’ve gotten plenty of looks at the leading ladies via images and posters, we’ve seen virtually nothing outside of them. But it looks like that’s about to change, as we now have our first official look at Chris Hemsworth’s character.

Keeping in line with the gender-swap, Hemsworth will be play the role of secretary for the Ghostbusters, which was originally played by Annie Potts in the original films. That’s basically all we know about him as of now, that he is just their secretary, but it is hard to think that they’d get Thor to just sit at a desk. One thing is for sure though, Hemsworth will bring a different kind of comedy to the dynamic, which was showcased in that god-awful Vacation remake. It’s also a good thing to keep in mind that Paul Feig was able to bring out some amazing comedy gold out of action star Jason Statham last summer in Spy. If there’s anymore untouched comedy left in Hemsworth, there’s a good chance it Feig will be able to mine it out of him. 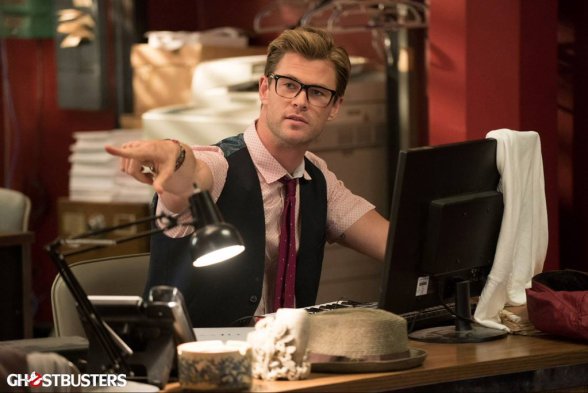 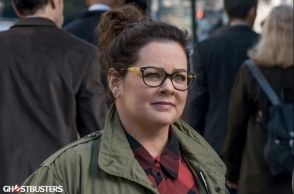 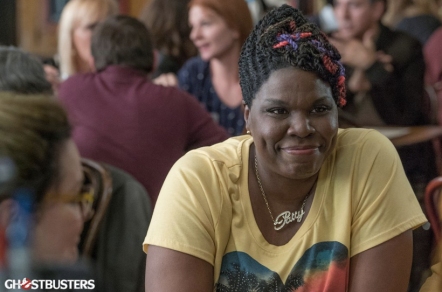 The four new looks at the ladies aren’t anything we haven’t seen before. But to me, Kate McKinnon continues to look like the standout, as well as the total badass of the group. From the beginning, she’s been the one I’ve been most excited about, I’ve very eager to see how she plays off of the other team members. There is no official synopsis for the film yet, but we do know that the new Ghostbusters are needed when New York falls prey to ghosts from a variety of different places and times.

On a side note, it’s been speculated throughout the past week that a first trailer for the film could be released before the end of the month. With the Super Bowl coming up this weekend, there’s a high chance we could see it pop up during the game, with a full version released online later that day. So until I see the first footage, I can’t really say whether or not I’m looking forward to it just yet, I’m just crossing my fingers that it doesn’t stay in-line with Feig and McCarthy’s comedy that we see time and time again.