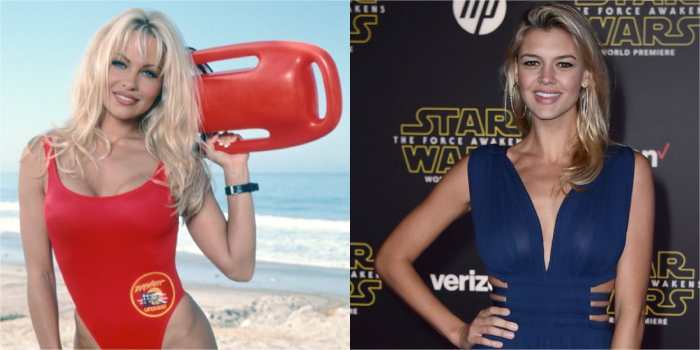 Star of the upcoming Baywatch movie Dwayne Johnson took to his instagram account to give us another update on the movie. Model/Actress Kelly Rohrbach has been cast in the role of C.J. Parker. Indeed many fans were curious about who would fill the shoes of the role made famous by Pamela Anderson.

If you think Rohrbach is just another beauty with no talent, then you’re sadly mistaken. The actress was previously seen in a few episodes of TV shows like Two and a Half Men, and Rizzoli & Isles. She can also been seen alongside Kristen Stewart and Steve Carell in Woody Allen’s upcoming untitled movie. She has big shoes to fill, but her credentials along with her slo-motion running and chemistry with Johnson in the video below is enough for me to bet that she’ll do great.

Previously, Johnson announced (with much enthusiasm) the casting additions of Zac Efron and Alexandra Daddario to the R rated comedy. Efron will play the young hot headed partner to Johnson’s Mitch character, while Daddario will play a lifeguard named Summer. David Hasselhoff and Pamela Anderson are also rumored to make cameo appearances.

Baywatch is quickly shaping up to be one of the hottest movies to look forward to soon. Seth Gordon (Horrible Bosses) is set to direct the movie. Look for the cameras to start rolling in the next couple of weeks!

How much are you looking forward to this Baywatch movie, with Dwayne Johnson, Zac Efron, Alexandra Daddario, and now Kelly Rohrbach attached?

For our #BAYWATCH and the iconic role of "CJ Parker" I had to make sure @kellyrohrbach was ridiculously sexy running in SLO-MO….

For our #BAYWATCH and the iconic role of "CJ Parker" I had to make sure @kellyrohrbach was… tough.

A pleasure welcoming @kellyrohrbach to our #BAYWATCH family for the iconic role of "CJ Parker". Yes, she's a walking smoke stack but more importantly… she's smart, tough and funny. Just the way we like 'em. Get ready world, we can't wait to bring you our generation's #BAYWATCH! You'll have fun… 👊🏾🔥💯👙🍆 (last emoji somewhat inappropriate).