The upcoming Tupac biopic (unofficially titled All Eyez On Me) has an opportunity to build off the success of Straight Outta Compton, and give a proper telling of the legacy left behind by the late rapper/activist to a now highly interested wide-range audience. So far, the film’s development hasn’t been well received. Between the troubling reports from previously attached directors and their displeasure with the studios handling of the project, and the time sensitivity over the music rights forcing the studio to move fast, its been a bumpy road for the biopic. Still, the studio has managed to get the wheels moving on film and its currently shooting for a 2016 release.

Director Benny Boom (50 Cent’s ‘Just a Lil Bit’ music video) will be making his first big screen debut as director. Its tough to say whether he’ll be up to the task on delivering such an important and sensitive biopic. While I remain highly skeptical, its somewhat intriguing seeing the kind of cast he’s bringing together for the film.

Playing the lead role of Tupac Shakur is newcomer Demetrius Shipp Jr. While the actor has no experience outside of a TV movie, he does closely resemble the late rapper. The question remains will he be able to pull off a performance of a Tupac. According to a TMZ report, the actor was offered the role purely on looks, which if true would be highly alarming.

Recently, two other two other roles have been cast, and both people are recognizable. Reprising his role as Notorious B.I.G. is actor Jamal Woolard. The actor is best known for playing late rapper in the ’09 biopic Notorious. Also added to the cast is R&B singer Keyshia Cole as Queen. 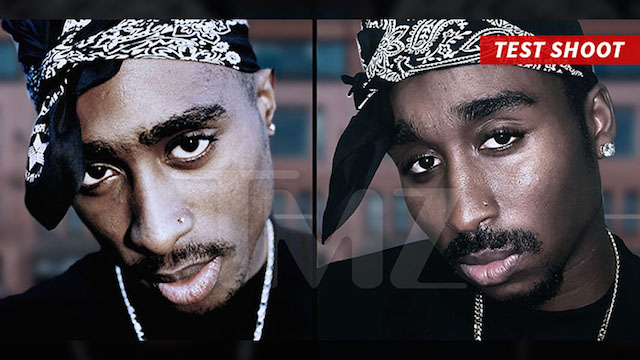 Like I’ve previously stated, its difficult for me to get excited about this biopic, and I hate talking like that. However by comparison, when Straight Outta Compton was coming together, it did so in a convincing way, even for less familiar N.W.A fans. Director F. Gary Gray, Ice Cube, and Dr. Dre were handling the N.W.A biopic in a collaborative way with passion and understanding for what they wanted to do. That’s not say this director (Boom) or the cast isn’t passionate about this film, but there’s something to be said about their studio bosses, Morgan Creek.

Lets take something important into consideration here. This studio at one point had directors like Antoine Fuqua (Training Day) and John Singleton (Poetic Justice starring Tupac) attached to the biopic. Both directors left the project, with the latter expressing huge displeasure over the handling of Tupac’s biopic and what kind of man they wanted to explore. Then there’s the studio’s selection of a director as inexperienced as Benny Boom. It seems forced, all because the studio has until the end of the year to get the cameras rolling before losing the music rights. If they had more time or got out of their own way, then Morgan Creek would’ve had an experienced director, rather than shoehorning someone else in.

At the end of the day, the best thing any of us can do right now is pray this biopic turns out decent, which is the level of expectation they’ve forced me to set.

What’s your opinion on this Tupac biopic? Are you more or less excited?