The second official ‘Batman v Superman‘ trailer debuted last week, and I thought it was near perfect. I absolutely loved the interaction between Clark Kent and Bruce Wayne. The subtle nods and references within their dialogue sparked excitement in us all. However, as the trailer went on I found myself feeling more and more alone in regards to loving this trailer. Jessie Eisenberg as Lex Luthor was viewed by many as being too comical. The appearance of Doomsday was criticized and compared in the humorous ways possible. Wonder Woman’s appearance to many felt like it took away from Batman and Superman. Honestly, I didn’t mind any of those issues, because it was kind of what I expected.

Since then, I’ve looked back on my initial reaction, and its possible that I was going through a bit of “fanboyism” for being overly positive. I do recognize some of the flaws with the trailer, but none of them have anything to do with anyone’s persona or appearance. My issues lie elsewhere with the trailer. So while I begin to criticize this trailer, I’m also going to defend some of the things that I loved. Things which many other people might see as a flaw. Let’s begin.

What did I say a few months ago when the first official (comic con) trailer released online? It was “too much, too soon”.

That first official trailer clocked in at a ridiculous 3 minutes and 40 seconds, which wouldn’t be a problem except we were still 8 months away until the film’s release. Going forward if any of the new trailers showed any more new footage, then it would be judged as “showing too much”. This latest trailer did exactly just that. It showed a bunch of new footage, and was too long. However, it really isn’t as bad as many people are suggesting.

Too Much Wonder Woman! (Not Really) 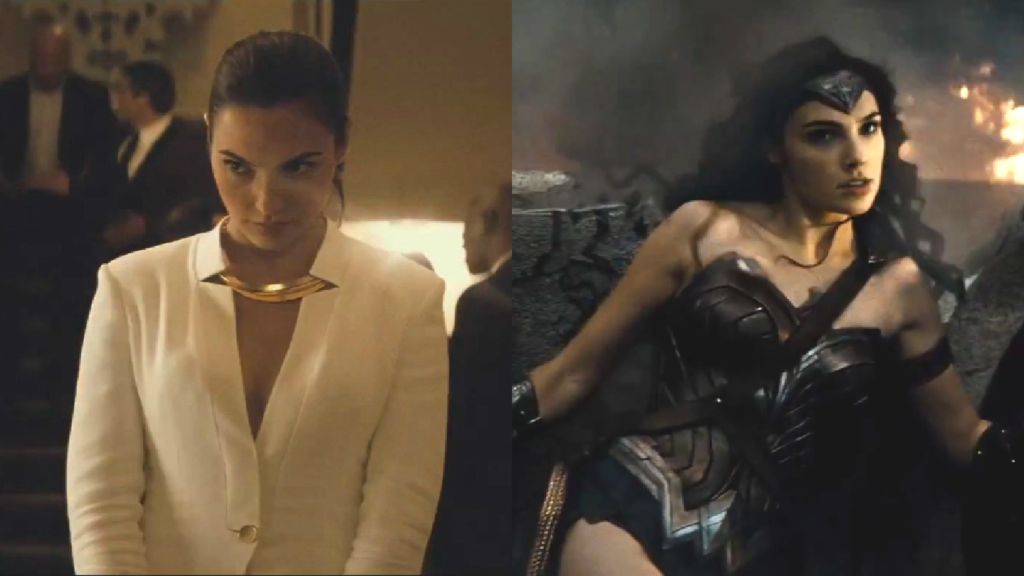 People using Wonder Woman as an example of this trailer “showing too much”, but wasn’t she also in the previous trailer? Yes she was, both in her combat outfit and in civilian clothing. Her appearance in the DC trinity shot at the end of the trailer should be no surprise, because we already knew she would step in and help Batman and Superman fight an unknown threat. The previous lengthy trailer, along with the first character posters hinted that. Its the trailer’s reveal of the mystery threat where Warner Bros slipped up.

First off there’s been no confirmation from any viable source of a Doomsday appearance, but lets pretend its in fact him. So why did Warner Bros feel the need to show Doomsday? It goes back to what I said earlier about them “showing too much” with the previous trailer. Warner Bros put themselves into a corner with that trailer by showing too much for a first trailer. Going forward, the studio probably felt they needed to offer even more with the next trailer. Sometimes going bigger isn’t always better. Bad move Warner Bros.

Now about these comments regarding the look of Doomsday, I see where many of you are coming from. The whole thing with comparing him to The Abomination or a Ninja Turtle is actually quite funny, but the look doesn’t bother me. Its speculation on my part, but I believe that won’t be Doomsday’s final form. I think he’ll grow more powerful as he fights on. As a result he’ll grow more spikes on his upper body and become the more familiar character we all know.

This whole controversy over the villain’s look is no different than what we saw from the photos of Apocalypse released months ago. Everybody (including myself) thought he looked funny and compared him to that Power Rangers villain. However looks aren’t everything, especially in promotional content. The fan outrage over Doomsday in this trailer is understandable, but like Apocalypse, I believe that won’t be his final form.

As for whether or not its too soon to introduce a villain like Doomsday remains to be seen. I don’t have a problem with Doomsday being introduced this early in the DC universe. We don’t know that Doomsday will get the Marvel treatment and be a one-off villain in this film, so stop pretending that’s the case. Maybe he proves to be too much of a threat for our heroes, and somehow gets teleported elsewhere.  Like I said it remains to be seen if this is a bad move, but I think Doomsday is a perfect threat who’s powerful enough to unite Batman, Superman, and Wonder Woman.

Also, lets not pretend like Doomsday needs an entire film, because he’s this character you can explore and understand (i.e. Loki or Kilgrave). As far as I’m concerned the character of Doomsday roars and growls, but doesn’t speak. His purpose is to cause destruction. He’s basically The Hulk minus Bruce Banner, and we’ve seen how those solo films turned out.

I’m going to speculate a bit again on Doomsday. Now, if Doomsday is in fact a result of Lex Luthor experimenting with kryptonite and General Zod’s corpse & DNA, then it presents an interesting opportunity for this version of Doomsday. Imagine if Doomsday has the conscious of Zod and can in fact communicate. You’re now able to relate to Doomsday as a character, because he is, from a certain point of view, General Zod. He’s gone from being a noble leader of Krypton who’s trying to save his people, to getting his life taken while trying to fulfill his purpose, to having his remains experimented on and transformed into a monster with extreme blood thirst. That to me would make General Zod’s fall more tragic, and it makes Doomsday a more interesting character, and arguably better suited to become reoccurring for the DC universe.

Lex Luthor Is Going to Be Terrible…

I’m not denying that Lex Luthor acted very comical in this trailer, but it also didn’t bother me. I think people are forgetting that Zack Snyder is giving us a slightly different version of Lex Luthor. This version of the character is a change-up from what we’re use to seeing. Both Gene Hackman and Kevin Spacey were great as serious, intelligent, older men, with evil intentions. In ‘Batman v Superman‘, Jesse Eisenberg will play an energetic, intelligent, young man, with evil intentions. We’re getting a different Lex Luthor here, and it’ll be no different than how we’ve gotten in the past a different Joker, a different Two Face, and a different General Zod.

As far as Lex Luthor’s introduction in the trailer goes, I didn’t mind it. What we saw was his public persona of an innocent, professional, yet energetic business man. People today love that kind of a leader. In the previous trailer, we saw nothing but a serious and somewhat evil character. The studio’s intention for this trailer is to present a different side of Lex, and I think their intentions were for us not to buy his act, because that’s not who Lex really is behind closed doors. Is he?

Now, for those of you thinking he won’t have any character development, and will be that annoying comical villain throughout the entire film, probably forgot about this little image…

All I can say is that funny guy we saw in the beginning of the trailer, will probably be non-existent at the end of the film. Those of you wanting a serious and evil villain, just look at the image above. Its going to happen.

Lex Luthor is not a physically built character, and he never was. He is a character who will fight you and sometimes defeat you using his intelligence and resources. That is what Zack Snyder is promising us with this Lex Luthor, and so far from what I’ve seen he’s delivered. Now, there is a chance that Jesse Eisenberg as Lex Luthor will be terrible, but lets wait until we see the film before we count him out already.

True, this latest trailer pretty shows us the entire film. That was a concern I had towards the marketing after that previous 3 minute and 40 second trailer. However, I think we’ve all known for sometime what will happen in this movie, and a big part of that is because of this…

Fearing the actions of a god-like super hero left unchecked, Gotham City’s own formidable, forceful vigilante takes on Metropolis’s most revered, modern-day savior, while the world wrestles with what sort of hero it really needs.  And with Batman and Superman at war with one another, a new threat quickly arises, putting mankind in greater danger than it’s ever known before.

First off, the title of the film says ‘Batman v Superman: Dawn of Justice‘. The first part obviously means the two heroes are going to fight it out, after a certain number of events happen in the film. No surprise there. The second part of title suggests the beginning of the creation of the Justice League. Obviously, Batman and Superman aren’t going to kill each other, and will eventually come to terms in working together for something greater than themselves.

Moving on from the title and towards the official plot synopsis above, it becomes even more clear of what any person could’ve guessed. The two are going to come together to face a new threat. So up until this latest trailer, we know Batman and Superman will investigate each other, fight each other, and then join forces. The only mystery was who the big threat was going to be, and as I stated before that’s where the trailer slipped up and showed Doomsday. The problem I have is how someone can say “I now know the whole movie”, when they probably already knew 90% of what the trailer showed. So the only big reveal was the threat itself in Doomsday.

I’m very much worried about the marketing for this film going forward. Four months remain until ‘Batman v Superman’ releases. We are going to get at least one more trailer. Since the previous two trailers combined for a whopping 6 minutes and 40 seconds, I hope Warner Bros cuts their trailers shorter. My only main issue with this trailer is the reveal of Doomsday, which is something Warner Bros didn’t need to show. Regardless of this latest trailer and its flaws, we’re all very much excited for this film, and we’re all hoping it does justice the characters and story. Especially for Aquaman.