When we all sit down to witness Star Wars: The Force Awakens, there a great number of things we will be looking forward to. For me, one that’s up there on the list is seeing Gwendoline Christie’s Chrometrooper Captain Phasma. She’s an elite Stormtrooper, yes, she’s part of the evil First Order, yes, but there’s no doubt it would be pretty damn awesome to be her. As J.J. Abrams’ The Force Awakens inches closer and closer, we continue to see more new stuff on the film (to much if you ask me…). This time Empire Magazine has done the honor, as they’ve released some sweet new goodies from the galaxy far, far away, including one badass new shot of Captain Phasma.

Although gender has played a big part in the Star Wars universe of old, it seems like it’s never played a bigger part than now. As of late, women equality both in front of and behind the camera has been the big talk of the town, and it seems like The Force Awakens is taking it head on. We see Carrie Fisher, Daisy Ridley and even Lupita Nyong’o taking big parts in the upcoming epic, but Christie’s Captain Phasma is the most pivotal out of them all. 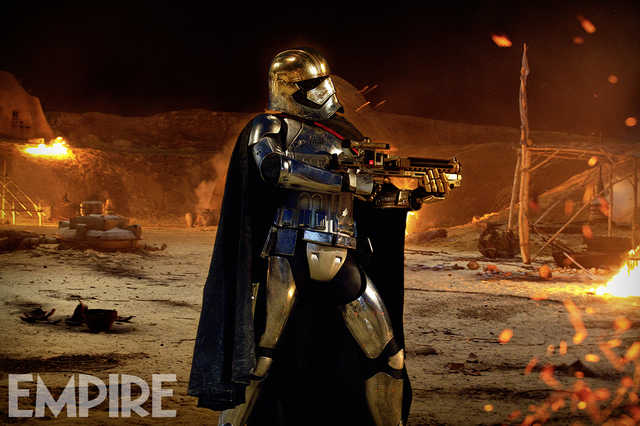 When we first saw (nameless at the time) Captain Phasma, we had no clue who he/she was, but what was our first guess? Gwendoline Christie. Of course we can see a Andy Serkis or Domhnall Gleeson playing the character. But why would we guess Christie above the rest? Because she is capable of doing exactly what those above can, maybe even bring something more. And the fact that J.J. Abrams has made sure to keep her face hidden and keep her as just Captain Phasma and not a she, it’s only helped that case that much more. It’s not she is a badass, it’s Captain Phasma is a badass, and that’s because of Gwendoline Christie.

Here, Christie speaks a little bit about the dynamic of her very exciting character:

“I found it to be a really interesting acting challenge, not just because of what I felt this character was representing — and it was just what I felt, and we talked about it a little bit, but it was never like a manifesto, ‘this is what it must be’ — and it was exciting to me to have that weight of responsibility taken away, of having to be a certain way as a woman, to have to be mindful in a way that isn’t always useful. To have that stripped away was very liberating, and it meant that as an actor I had to focus on other things. I had to focus on what my body was communicating and what exactly my voice is communicating.”