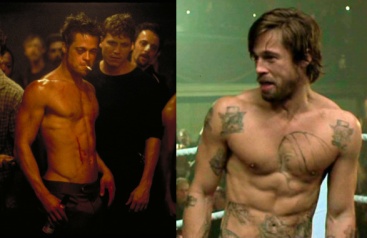 Welcome Back to Showdown Sunday #8

Every week we pit two movie related forces (characters, movies, directors, etc) against each other and you guys vote who wins (via. Fan Poll).

Brad Pitt starred in back-to-back films where he played a fighter. In ’99 he starred as Tyler Durden in ‘Fight Club’, and in ’00 he starred as Mickey O’Neil in ‘Snatch’. In each film both fighters proved they could take a beating and give one.

Putting them both in a ring together with nothing but their bare knuckles, who would be the last man standing in a fight? Cast your vote below!