Empire Unveils The Joker in Full Costume; Jared Leto Finally Speaks out on Playing the Clown Prince of Crime in ‘Suicide Squad’

There hasn’t been a whole lot from Warner Bros.’ upcoming DC film Suicide Squad since its Comic-Con panel this past summer, but now we know why. Empire Magazine – who has definitely had their share of 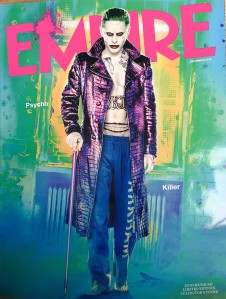 drops over the years – has unveiled, in full costume, Jared Leto as The Joker.

Giving us our first official and full body look at Leto in the role, the magazines collector’s edition features the Clown Prince of Crime in all his glory (and some serious color) on the cover. Leto has been notably absent from all the cast photos released to this point, and this is definitely the reason why. WB has been keeping wraps on the character up to this point, wanting to reveal him to the world in a big and bold way, rather then stick him between a few characters in an out-of-focus photo.

With this full front page view, The Joker arrives in a big way. To start, the cover proclaims that this version is a “Psycho Killer”, which is definitely a departure from past Joker’s. On top of that, his look in unlike anything we’ve seen from this character before. Yes, the colors are the same, but Leto’s Joker trades in Nicholson’s face tailored suit and Ledger’s custom made digs for a texturized purple trench coat with some baggy, draw-string “Arkham” sweat pants, bare feet, and one sleek looking cane. To top it off, the full-body make-up of pale-white skin helps his bright green hair and dark tattoo’s pop, clearly separating this Joker from ones of the past. It’s different, it’s unique, and it’s a look that fits with the “Psycho Killer” description this character has been given; here’s to hoping the performance matches it (it will).

Now that the film has wrapped production, the cast and crew are now preparing themselves for all the publicity that will no doubt come with this type of film. And while Will Smith, Margot Robbie, and other have spoken out about the film, their characters, and their experience, we’ve all been waiting for Leto to speak out about The Joker. Well, that day has finally come! Along with the image above, Leto sat down for a lengthy interview and dropped some really juicy nuggets on his take on the character. But before Empire could even get a word out, Leto pondered if he should take the interview:

“I was just thinking that the Joker would probably just say, ‘Fuck you,’ and hang up.”

But following his decision to take the interview, he further went into his experience as the character and the kind of madness that comes with it:

“There was definitely a period of…detachment. I took a pretty deep dive. But this was a unique opportunity and I couldn’t imagine doing it another way. It was fun, playing those psychological games. But at the same time it was very painful, like giving birth out of my prick hole.”

Good lord that just sounds intense, and extremely painful. He also explained that part of the process of becoming this character was to listen to 1920s gospel music and reading literate about Shaman’s, which will definitely bring something completely new to this character. He continued:

“I always get the sense that The Joker may be much older than people think. It’s something different. If you don’t break rules, you’re not going to strike new ground. I 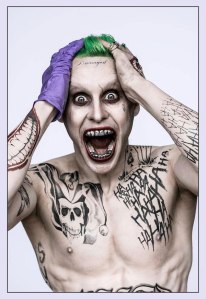 think I’ll be cooling down for the rest of my life.”

While we’ll be measuring this Joker on the level of Leto’s performance, there’s no doubt by any that his costume makes a visual statement, creating a fantastic base to go off of. Director David Ayer also commented on bring the iconic character to the big screen:

“The Joker is the third rail of comic book movies. There’s a power to that character, and by some freaking miracle, through the incredible things Jared has done and the photography and all the other millions of things that went into it, we’ve cooked up something transcendent. He’s scary.”

This is everything I’ve wanted about this character from the beginning of the DCEU. I wanted to see the “Psycho Killer” Joker, I wanted to see something dark and violent and just pure insanity, something completely different from what we’ve seen in the past. There’s no doubt that Heath Ledger’s Joker was a triumph, masterpiece really. But I’ve been a firm believer from the beginning that Leto’s version will be unlike anything we’ve ever seen, the best Joker yet, and everything above is exactly why.

What do you think of The Joker’s new look? What about all the comments made? Could Leto’s Joker end up being the best we’ve seen? We’ll have to wait and see until next August.