Showdown Sunday #5: ‘Inception’ vs. ‘The Matrix’ 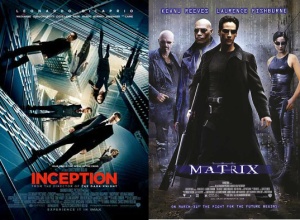 Welcome back to Showdown Sunday!

Every week we pit two movie related forces (characters, movies, directors, etc) against each other and you guys vote who wins (via. Fan Poll). Last week’s results proved that deciding which studio makes the better animated films between Pixar and Disney is too close of a call to choose only one [or simply no one cared to vote =)].

This week’s Showdown Sunday focuses on movies that twisted our minds by altering the world as we know it. When it comes to such a topic, no two movies had audiences questioning reality more than Inception and The Matrix.

For this showdown, I’ll give you each film’s synopsis, followed by a series of questions as guidelines, and a scene from each movie. The scene will be a moment where I felt audiences’ minds were twisted by an important revelation.

Dom Cobb is a skilled thief, the absolute best in the dangerous art of extraction, stealing valuable secrets from deep within the subconscious during the dream state, when the mind is at its most vulnerable. Cobb’s rare ability has made him a coveted player in this treacherous new world of corporate espionage, but it has also made him an international fugitive and cost him everything he has ever loved. Now Cobb is being offered a chance at redemption. One last job could give him his life back but only if he can accomplish the impossible-inception. Instead of the perfect heist, Cobb and his team of specialists have to pull off the reverse: their task is not to steal an idea but to plant one. If they succeed, it could be the perfect crime. But no amount of careful planning or expertise can prepare the team for the dangerous enemy that seems to predict their every move. An enemy that only Cobb could have seen coming.

Thomas A. Anderson is a man living two lives. By day he is an average computer programmer and by night a hacker known as Neo. Neo has always questioned his reality, but the truth is far beyond his imagination. Neo finds himself targeted by the police when he is contacted by Morpheus, a legendary computer hacker branded a terrorist by the government. Morpheus awakens Neo to the real world, a ravaged wasteland where most of humanity have been captured by a race of machines that live off of the humans’ body heat and electrochemical energy and who imprison their minds within an artificial reality known as the Matrix. As a rebel against the machines, Neo must return to the Matrix and confront the agents: super-powerful computer programs devoted to snuffing out Neo and the entire

Tagged as: Inception, Sci-Fi, The Matrix