Black Mass stars Johnny Depp as Whitey Bulger, one of the most notorious gangsters in the history of South Boston. When a mafia family threatens to overtake his turf, Bulger strikes a deal with FBI agent Johnny Connolly (Joel Edgerton) to become an FBI informant. As the FBI cracks down on the Mafia, the violence and crime of Bulger rises with drug deals, murder, and extortion. Based on a true story.

I’ll start off talking about what I came in most excited to see and that’s Johnny Depp return to form. Performance wise, its Depp’s best in years. We’re accustomed to seeing Depp perform onscreen wearing heavy make up, and although that’s the case here the difference is he brought his A-game as Whitey Bulger. He gave me a character I thought was very intimidating, one who would cause serious damage to someone within a heartbeat. Depp also showed me a softer side of Bulger in certain scenes, particularly around those dear to him. It’s a performance which reminds those who’ve forgotten the kind of actor Depp can be.

Outside of Depp, there’s Joel Edgerton who shines in this film. He’s given the most to do out of the remaining supporting cast and takes advantage of it as the manipulative FBI agent. Speaking of cast, the film features a highly talented supporting cast in Benedict Cumberbatch (as Billy Bulger the state senator), Kevin Bacon (FBI director), along with Adam Scott, Dakota Johnson, Corey Stoll, and Peter Sarsgaard. All of them give solid performances, but also aren’t given much to do. Sarsgaard in particular was a complete waste, in my opinion. 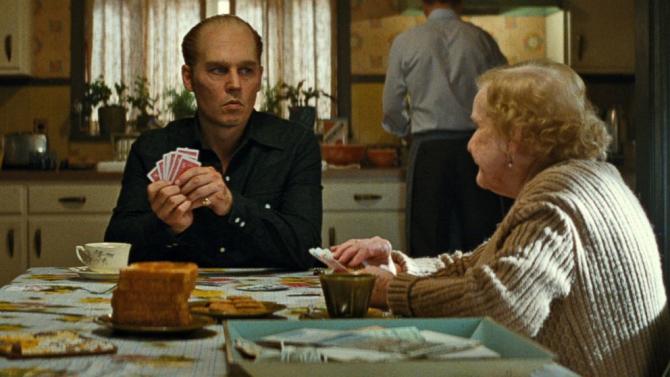 As far as the story goes, I knew next to nothing about Whitey Bulger. I was expecting a well told, in depth story of this notorious South Boston crime lord. The structure of the story comes from the main guys in Bulger’s former gang testifying against their former boss. Its not a flawless story, but it gives me just enough to know who he was outside of his criminal ways, especially as a family man.

There’s quite a bit of slow moments in the movie, and not as much violence and crime as I’d expected. I guess the trailers led me to believe the film would feature a lot of graphic violence, that’s not to say there wasn’t any. Its a personal preference.

This was Depp’s second time playing a real life criminal (Public Enemies), and I would say this was the better film, although I had a funner time with the former. Those who are a fans of Depp and wishing to see him return to form will enjoy this film.