Deadpool Gets His Own Sweet Entertainment Weekly SDCC Bonus Issue; Ryan Reynolds Talks the Difference Between ‘Green Lantern’ & ‘Deadpool’, His Superhero Future & the Trouble of a ‘X-Men’ Crossover

If anyone was destined to play a comic book character, it’s Ryan Reynolds. There has never been and isn’t a better person on planet earth that is better suited to play the lethal and wise-cracking Deadpool. Reynolds (who portrayed Deadpool back in that god-awful X-Men Origins movie) has been on board with and pushing for this film through thick and thin, for what seems like decades. And because of some genius (and who Reynolds praises) who released that amazingly beautiful test footage late last year, we FINALLY get the Deadpool movie we’ve always begged for!

Not only was it announced, but it was announced with a release date that was just a little over a year away, which got fans that much more excited. It has finished filming and is now in post-production, and luckily for us fans, we don’t have to wait much longer to see how this long, long, LONG awaited comic book movie will look. San Diego Comic-Con is just days away and the panel featuring the Merc with a Mouth is by far one of the most anticipated of the weekend, because it’s basically a guarantee that we’ll see the first real footage of the movie featuring Reynolds as the Pool of Death. Wether it’s a trailer or just a clip, we’ll just have to wait and see this weekend.

Entertainment Weekly has been on a pretty big terror over the last week. The site has unleashed the Con before the Con has even started, with all kinds of images and looks at some of the biggest movies that will be showcased this weekend. So far we’ve seen the Comic-Con preview issue which covers Warner Bros. juggernaut film Batman V Superman, as well as the official Comic-Con issue in comic book form featuring many great names. But in my opinion, the EW SDCC Bonus Issue is by far my favorite cover, as it gives us a fantastic close-up look at Deadpool, in true Deadpool fashion. Not only that, but I’ve included the latest image that’s been released, which looks very familiar (cough, test footage, cough)… 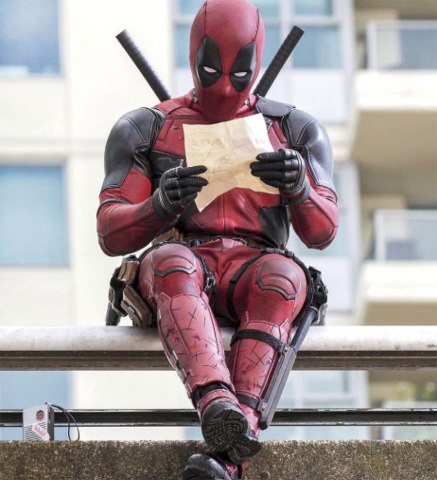 If you haven’t already done so, I highly recommend you clicking on the full-size link – the comment bubble is so classic Deadpool, and it only gets me that much more excited to see what’s in store for the Tim Miller and Ryan Reynolds led Deadpool this weekend.

As for the new image, if you’ve seen the official test footage, you’ll definitely recognize it. And although the colorful piece of art Deadpool has in his hands can’t really be made out, it’s a safe bet that we know what it is from that very test footage. And if it is, I can’t freaking wait to see that test footage adapt to live-action. Weeks ago, some set photos hit the web of what looked like that scene being filmed a bridge, and even though it wasn’t ever confirmed, it would be a giant missed opportunity for them to not put that scene in the movie, one way or another.

Just think about this for a second… For us fans who know the character and have been waiting for this movie, we will more than likely be getting our first look at an actual Deadpool movie this weekend. It’s still kind of hard to believe that it’s actually happening!

Deadpool himself Ryan Reynolds is currently promoting his latest movie Self/less, and while being interviewed by The Huffington Post, Reynolds was asked about Green Lantern vs. Deadpool and what his superhero future looks like:

“Playing Green Lantern was difficult in certain respects, and one of which was that there was no suit, there was no sort of identifiable Green Lantern suit, it was created in post-production by computer graphic artists, and one of the great pleasures of playing Deadpool was that when we were shooting we invited a lot of the Make-a-Wish kids on and they connect with the character because he’s a guy who has cancer but he’s a guy who has never let this cancer stop him and I think that it’s fascinating to see that but it’s also really amazing to see their faces when you walk in in that suit, there it is, it’s tactile, it’s something they can touch and grab.”

“We all want to be Batman alone at home in our specifically-sewn Bat pajammies, but no, I have no desire to play any other superheroes after this, hopefully we’ll get to do ‘Deadpool’ again. Given the fact that it’s rated R, the fans have to show their support for it, and they have to come out and make it worthwhile for the studio to make another one, but that’s it for me. I’ve punched that superhero card a few times now, and that’s enough.”

And while talking with Screen Rant during the same press tour, Reynolds had this to say when asked about a possible 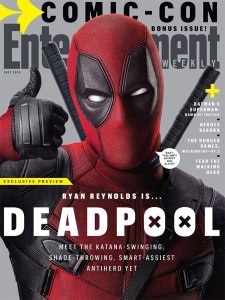 crossover with the X-Men films:

“That’s a damn good question. You tell me. It would be kind of hard, wouldn’t it? Because you have a character – let’s say you have a character who knows he’s in a comic book movie, that sort of breaks the fourth wall [and] has a tendency to kind of say people’s real names instead of their characters’ names. How do you introduce that into another universe that…does not do that? So…I don’t know. I’d be curious to say. I’m not saying that’s not going to happen. I don’t know if it’s going to happen. I would love to see that.”

“You have to be very careful about how you do that because you don’t want to do a disservice to any one of these characters that are beloved by everyone.”

I sure as hell hope fans show up to this thing! If you are at all debating whether or not you should see it, I’m telling you to get everyone you know together, and support and go watch this movie opening weekend. It may be rated R, but it’s going to KILL. I know that not every movie is a guaranteed hit, but because of how long this movie has been trying to get made and it pretty much becoming the passion project for both director Tim Miller and star Ryan Reynolds, it’s got a very good chance at being really, really good.

I would just like to add that the costume is one of the best out of all comic book movies to hit the screen. It may be the most true to the comics out of them all and it looks freaking AWESOME. We’ve seen some crazy comic book ideas hit the screen, but we will have never seen anything like Deadpool when it hits theaters next February, and I really cannot wait to see it all go down in what will hopefully be a bloody and action-packed piece of insanity, as well as just an overall great film.