Written by Max Landis (Chronicle) and directed by Nima Nourizadeh (Project X), American Ultra has quickly become one of my most looked forward to movies of the next few months. Starring Jesse Eisenberg and Kristen Stewart (among others), a few new images and posters have been released for the stoner action/comedy.

As I hinted at above, the film revolves around a stoner and his girlfriend, who’s lives are interrupted when a government operation lands in their small town with the plan of wiping the stoner out, who’s in fact a government sleeper agent.

I didn’t know about this movie at all until I saw that incredible first trailer (recommend the red band), and these first images definitely play off the trailer and the fact that Eisenberg and Stewart’s characters get beaten up quite a bit during the movie, which is what we saw in the first trailer as they were not afraid to get their hands dirty. Also, the new posters give us a trippy new look at American Ultra‘s stoner side, which should definitely be the comedy aspect of the film.

Thanks to Collider for the images and posters, which you can see below: 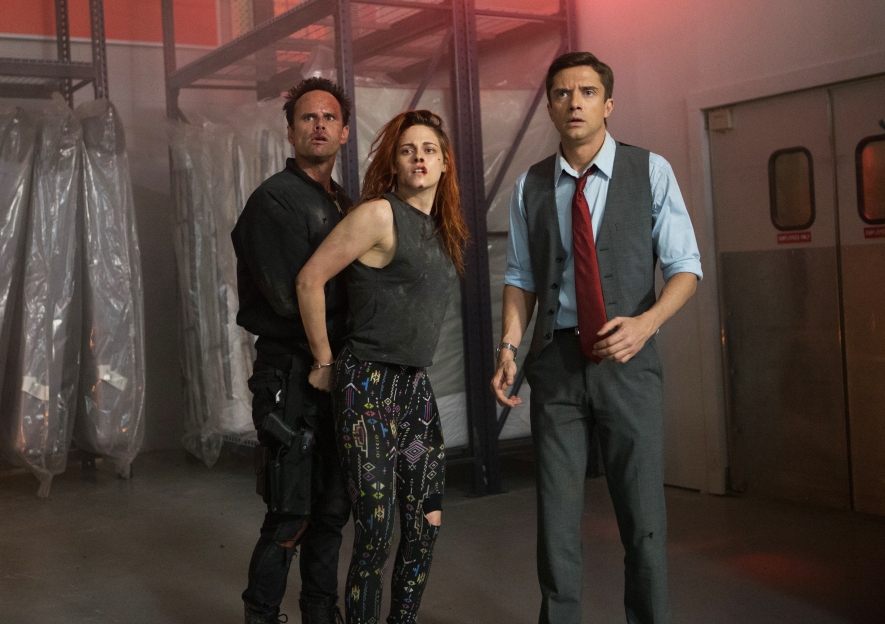 This is one looks like a ton of freaking fun. With the writing duties coming from Max Landis, that gives me great confidence in how great this film can be. Jesse Eisenberg and the supporting cast is a lock, but Kristen Stewart is the wild card here. Many have given her grief for her dull and ‘stoned-face’ look, but in that first trailer, she looked very much alive. Her character is involved and getting her hands dirty as it seems, she can steal and elevate this film in a really good way. I’m looking forward to finding out!

An action comedy about Mike (Eisenberg), a seemingly hapless and unmotivated stoner whose small-town life with his live-in girlfriend, Phoebe (Stewart), is suddenly turned upside down. Unbeknownst to him, Mike is actually a highly trained, lethal sleeper agent. In the blink of an eye, as his secret past comes back to haunt him, Mike is thrust into the middle of a deadly government operation and is forced to summon his inner action-hero in order to survive.