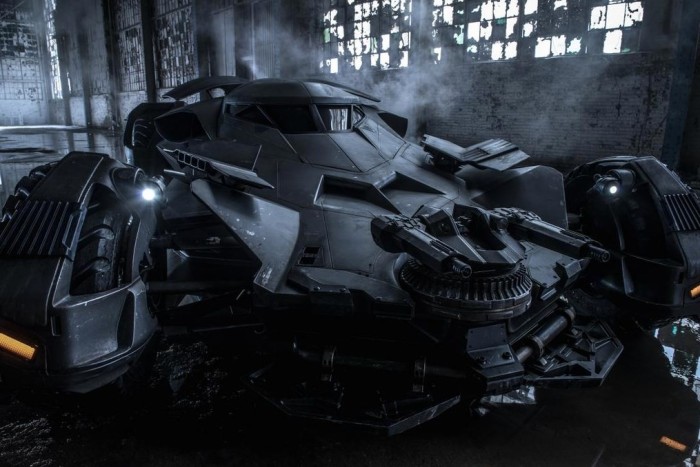 During the Licensing Expo in Las Vegas, some details were given for Batman V Superman, more specifically for the Batmobile. We’ve seen some set photo’s of the heavy combat vehicle riding through the streets of Gotham, before Zack Snyder released an official photo. Now we have some specs on the bat mobile courtesy of Collider.com.

Single-handedly designed and fabricated in near complete seclusion by The Batman, this infamous pursuit and capture vehicle has earned its reputation as the apex predator on the mean streets of Gotham City. Over powered with an unmatched hybrid of prototype military and civilian performance technologies, this top machine has been estimated to reach speeds of up to 205 MPH. The Batmobile’s imposing defense capabilities, supported by stolen Wayne Industries technologies, have been integrated with the latest in covert military grade armaments, stealth and active protection systems.

More images showed the inside of the Batmobile and what fun features Ben Affleck’s Batman can utilize for his enemies. Stuff like Harpoon Fire, Spiked Coil, Anti Police, Electricity, Poison, Fire, etc.

Later on during the expo, some photos were taken of displays featuring costumes for Wonder Woman (Gal Gadot), Superman (Henry Cavill), and Batman (Ben Affleck). We’ve previously seen official character posters released at last year’s Comic Con. These photos focus on the costumes alone and the detail of them.

There are over 30 images you can see over at Collider.com. For now, I just picked out a couple to share with you.