The release of Marvel’s Ant-Man is approaching and fast, which means Marvel will definitely be pushing more and more out on the world’s tiniest hero, which starts with these newly released images. Ant-Man is officially known as the final installment of Phase Two for Marvel’s Cinematic Universe, but it is also no doubt the start of something new for the MCU.

Included in the stills below are Paul Rudd, Michael Douglas, Evangeline Lilly, Corey Stoll, and David Dastmalchian. These new images give some great looks, more specifically great look at Ant-Man in action and the detail in his super-suit. Check it out: 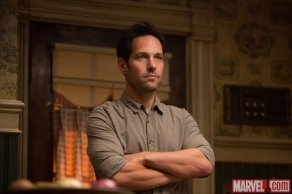 Some of them aren’t exactly new, but the rest are pretty awesome. I was already pretty excited for this movie (it’s Marvel, duh), but it’s quickly becoming one of my summers most anticipated movies. I know it sounds a bit ridiculous of a superhero who runs around with ants called Ant-Man, but I really think this movie could be to 2015 what Marvel’s other wacky idea in Guardians of the Galaxy was to 2014.

Check out two new TV spots as well, with a little bit of new footage: