The last week or so has seen the set of Suicide Squad opened to the world. It seems like every day we get more and more on David Ayer’s comic book movie, with the latest being the biggest. We’ve seen the entire Task Force X assemble on set and we’ve even gotten a number of full looks at what Jared Leto’s Joker looks like, but now, now we get the goods.

The latest batch of set images reveal that Ben Affleck’s Batman will in fact show up in Suicide Squad. It’s unknown whether or not it’s in flashback form or present time, but either way he does and thanks to Just Jared the proof. 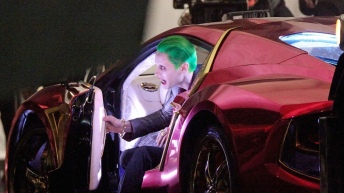 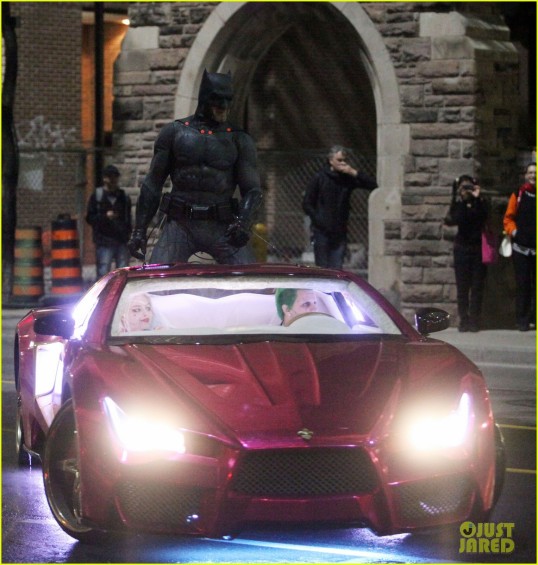 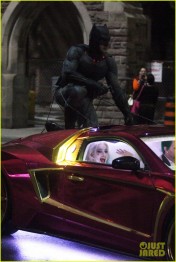 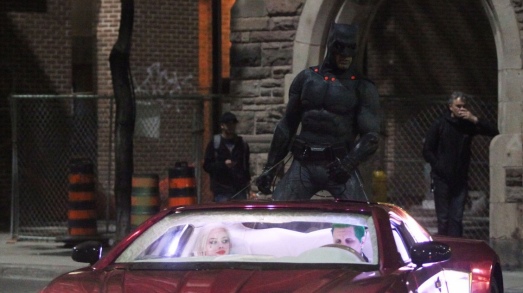 137846, Margot Robbie, Jared Leto and Ben Affleck seen filming on set of Suicide Squad in Toronto. Margot Robbie was in the scenes but the Joker was not Jared Leto but his stunt double and Infiniti G35 car with a Vaydor body kit. Batman jumnt onto the Joker car and rips a hole in the roof. The Batmobile also made an appearance. Toronto, Canada – Wednesday May 27, 2015. CANADA OUT Photograph: © PacificCoastNews. Los Angeles Office: +1 310.822.0419 sales@pacificcoastnews.com FEE MUST BE AGREED PRIOR TO USAGE

We’ve seen Ben Affleck appear on the set of Suicide Squad in the past, but never knew whether or not Batman would. Now that we know Bruce Wayne does suit up in this villain-centric comic book movie, now the question becomes in what time period? It’s heavily thought that these scenes will actually become a flashback in the full movie, possibly the moment Batman catches Joker and sends him to Arkham, leading into the events of Suicide Squad. But as for now, that’s just speculated and nothing official.

The only thing official coming from this? Just how awesome it is to see a confrontation between the Dark Knight and Clown Prince of Crime actually happening, especially between a Ben Affleck Batman and Jared leto Joker. Who knows, it could end up being just seconds or a few minutes of the movie, but there’s no doubt that it’s foreshadowing what’s to come later on in the DCCU, that it’s just the beginning of what should be one insane relationship between these two iconic characters on screen.

P.S., I can’t help but turn to Margot Robbie every time a new image of her pops up. I mean, how can someone playing Harley Quinn looks so ridiculously good? That is all.