Following the release of that incredible second trailer, a batch of new images have been released for 20th Century Fox’s rebooted superhero franchise Fantastic Four. From the beginning, the movie has been in question. But over the last few weeks has seen many people changing their minds, with the new trailer being the total sell. And while we wait to see even more on this movie, these new images and new poster should be able to quench our thirst for at least a little while.

In the images, you can see Miles Teller as Dr. Reed Richards aka Mr. Fantastic, Kate Mara as Sue Storm aka The Invisible Woman, Michael B. Jordan as Johnny Storm aka The Human Torch, Jamie Bell as Ben Grimm aka The Thing, and Toby Kebbell as Victor Domashev aka Doom.

The images are really cool, and have a lot of things going on. First, I like that each photo is focusing on some kind of powers and introducing us to these characters and what they can do, just as that last trailer did. The next interesting thing is the image of Johnny and Sue Storm going at it. This must be the moment they use their powers for the first time with all hell breaks loose (see the soldiers on the ground in the background). It won’t be known what is really going on until the movie is released, but this looks like a really cool scene and something that will play out on screen really well. The look of each of the characters powers is beautiful, especially the Storm siblings.The Thing is obviously just badass looking, then there’s our first look at Doom and it’s awesome. Yeah, it’s different from the comic book look but it doesn’t need to be that look. As long as you’re able to look at the character and say ‘Oh, that’s Doom’, then it shouldn’t matter. I personally think it’s very cool and very realistic. Now I’m just waiting to see how the whole hacker background thing works out.

One thing these images do for me is get me extremely pumped to see these heroes in action. The original Fantastic Four movies didn’t use these characters powers like we had all hoped, but Josh Trank’s version looks like it could be exactly what we want. The new trailer features a ton of awesome action, with these new images just giving us more fantastic (pun intended) insight into what the teams powers are. Yeah, I’m in, August can’t get here any faster.

Along with the images, a brand new poster has been released as well. I’m sure as we get closer to the movie we’ll see some character posters, but either of the previous two posters could end up being the final. Also, the more and more I see these actors in these roles, I freaking love the casting. Each one fits the role so damn well, which is huge. 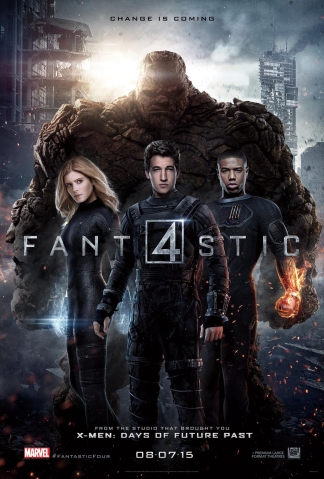