Monday night, Warner Bros. held special event screenings across the country for the Batman V Superman: Dawn of Justice trailer in IMAX. You may be thinking that it’s a little weird to hold special screenings for a trailer, but this was suppose to be the big reveal until the trailer was leaked late last week, which turned into a wildfire. With fans already signed up and psyched up to attend before the leak, director Zack Snyder wanted to thank them for coming anyway, so he promised some exclusive footage for those fans attending. On top of that, he also released a brand new image of his Batman suit!

Before I get to a little description of that exclusive footage, here’s the brand new image I was talking about. Giving us our first full look at the suit Ben Affleck will be wearing as Batman.

And here’s an even larger version!

Yeah, it’s ridiculously freaking awesome. In my opinion, this is the best Batman suit to ever be put on the big screen. It’s known that Batman V Superman is heavily influenced by Frank Miller’s The Dark Knight Returns, and this suit does just that. It’s battle worn, it’s big, and is all kinds of badass. It may be an actual suit this time around (which I love), but it’s just as equipped and ready to go as Christopher Nolan’s armored version. Even with Ben Affleck not in the suit, we can see what kind of Batman we’ll be getting on screen. A Batman that we’ve never seen before; a cruel, dark, gritty, and ruthless Dark Knight. And I’m all kinds of excited to see it go down!

As for the IMAX event. From what I’ve heard, Snyder recorded a video introduction thanking all fans, which also took them through the event. The trailer that was shown is the trailer we’ve all seen, but with a little different ending.

Here’s a summary of what went down at the event last night thanks to /Film:

“After the logo, the footage comes back to the showdown. First you see Superman pull up his arm and start to run. Then Batman does the same. Then a shot shows both superheroes running at each other full speed and just when they’re about to collide – it cuts. Three shots, six seconds.

Snyder then came back on screen and explained that they were going to show the footage again, but to watch out for a few things. One, he said the final few shots (basically everything from the mechanic Batsuit on) was shot in native IMAX and would fill the screen, which it did. Then he explained that the extra footage would not be seen with the trailer in other places. It was only for fans who attended.”

Sounds like some pretty good stuff, right? I understand keeping something special for the fans that attended the event, but for how mixed the word of mouth was on the debut trailer, it might’ve been better for WB to just release that version of the trailer, even though it is a slight difference. And with it being such a slight difference, if I had the chance to attend the event, I would’ve been happier about receiving the free teaser posters and early screening ticket than actually seeing the footage.

Speaking of the teaser posters, fans received one of the following teaser posters on their way out and a special ticket to an early screening of Batman V Superman at the same theater one week before its release come next March. How damn lucky are those folks? 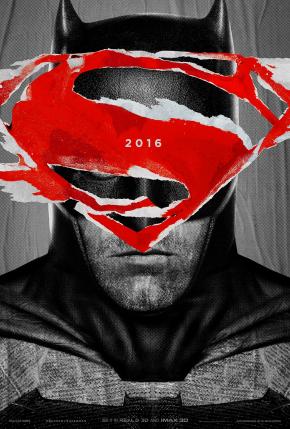 I’m okay with the posters, they cool. I don’t really know how I feel about the very political vibe to this movie so far. I get that it’s about Batman vs. Superman and how Superman is viewed and what not, but it feels like a politics race right now. I do like the look of them, with each characters colors featured then flipping on their buddies, but I can’t help but think and laugh at the fact that it feels like I’m looking at Presidential candidates who hate each other instead of superheroes who are about to duke it out.