Last week saw the first teaser trailer for the latest entry into the James Bond franchise, Spectre, released. It was simple, but everything we wanted. With it just a little over a handful of months out, expect to see more stuff released as it’s in the heart of shooting. Which is where these newly released images come in to play, which feature looks at the said opening scene, as well as three of the main players for Spectre.

The Daniel Craig Bond movies have been incredible, more than anyone expected them to be. Casino Royale is in my top 10 movies of all time and last year’s Skyfall was one of the best Bond movies ever. So it’s safe to say that Spectre is going to put its best foot forward and continue what these Bond movies have done.Everything we’ve seen so far, from featurettes to that first teaser, it’s all backed that notion up and then some, taking Spectre from one of this year’s must see movies to one of the if not the most anticipated Bond movies of all time.

These new images feature looks from the opening scene, which take place in Mexico at the Day of the Dead festival. The Bond movies are famous for always having that cinematic opening chase scene, setting the tone for the rest of the movie. Craig’s Bond movies have had fantastic opening scenes, and I expect nothing else from this one. Following the Day of the Dead shots are images featuring Monica Bellucci, Christoph Waltz, and 007 himself Daniel Craig. 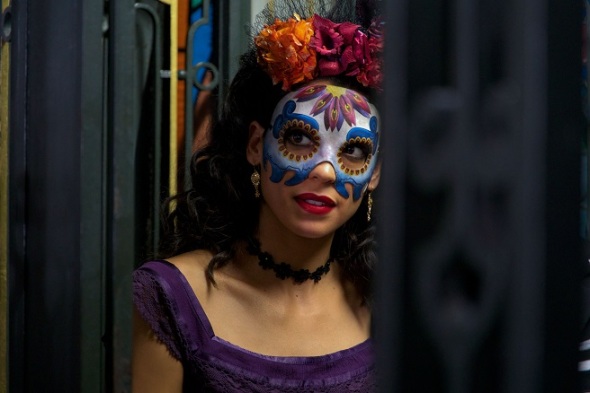 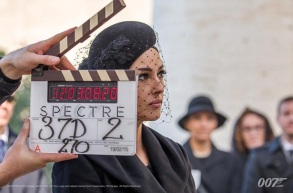 The images aren’t much, but it’s just so cool to see stuff on Spectre. From the moment it was announced it’s been very high up on my radar, so anything that’s released that has ‘Spectre‘ on it, I get giddy about. I can’t wait to see that first full-length trailer!