Below you can see first look images of Charlie Hunnam (along with director Guy Ritchie) on set Ritchie’s Knights of the Roundtable: King Arthur, Taron Egerton and Hugh Jackman on set of Eddie the Eagle, and Bryan Cranston in The Infiltrator.

Knights of the Roundtable: King Arthur

As I just found out, Warner Bros. Knights of the Roundtable movie has been hanging around for some time now, but it has now officially started production. To celebrate the long awaited start of filming, director Guy Ritchie (The Man from U.N.C.L.E.) took to his Twitter to post the first image. It features Ritchie alongside his leading man, Arthur Pendragon himself Charlie Hunnam. 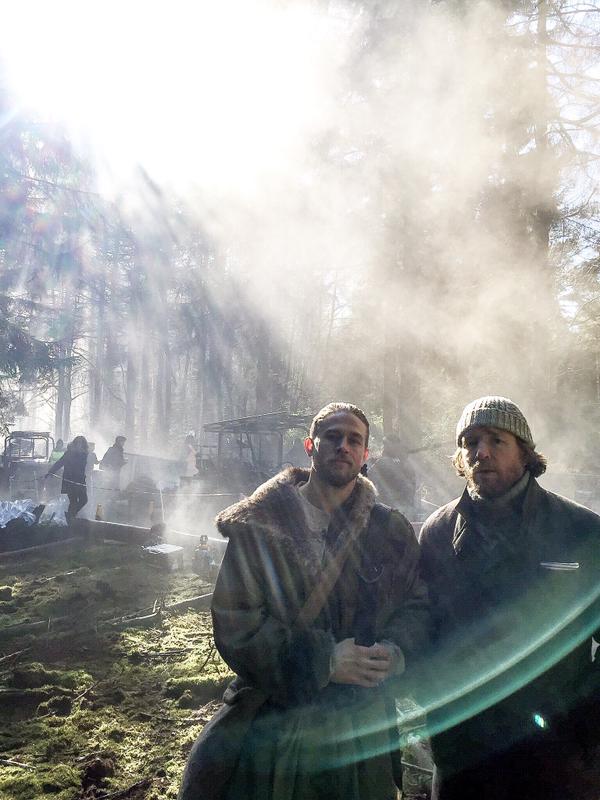 Along with the image, the official synopsis has been released:

The bold new story introduces a streetwise young Arthur who runs the back alleys of Londinium with his gang, unaware of the life he was born for until he grasps hold of the sword Excalibur—and with it, his future. Instantly challenged by the power of Excalibur, Arthur is forced to make some hard choices. Throwing in with the Resistance and a mysterious young woman named Guinevere, he must learn to master the sword, face down his demons and unite the people to defeat the tyrant Vortigern, who stole his crown and murdered his parents, and become King.

With Hunnam as Pendragon, we will see Jude Law in the villain role, as well as Astrid Berges-Frisbey, Eric Bana, and Djimon Hounsou. Supposedly, King Arthur is the first of a planned six-movie franchise. Now, it’s definitely hard to say whether or not it will make it that far, this first movie will play a big part in that. And since it might be a six-movie franchise, it makes sense that the first would mainly be an origin story.

And although we’ve seen a number of movies and different incarnations of the character, I’m pretty damn interested to see what Ritchie can do with this kind of mythology, it definitely has the potential to be a major kick-ass movie and franchise.

Knights of the Roundtable: King Arthur has a July 22nd, 2016 release date.

Now of course a major sport event like that couldn’t not be made into a movie, right? Here’s our first look at Eddie the Eagle which stars Taron Egerton (Kingsman: The Secret Service) as Eddiw Edwards and Hugh Jackman, who plays Edwards’ trainer Chuck Berghorn. Thanks to Mr. Jackman and his instagram account for the image:

Day #1 on the set of #EddieTheEagle, with my mate Taron Egerton.

I think we can all agree that Bryan Cranston is the man, right? Most of the agreement comes from his role as Walter White for AMC’s television hit Breaking Bad. His performance of White will go down in TV history, but us movie buffs want nothing more than to see him in more leading roles on the big screen. After smaller roles in the Total Recall remake, Argo, and last years Godzilla (what a disappointment to cut his character short…), Cranston FINALLY has a movie coming out where he’s the lead.

In The Infiltrator, Cranston is Robert Mazur a.k.a. Robert Musella, an undercover agent who infiltrated the globe’s largest cartels and discovered just how deep into society their influence extended. Here’s a synopsis for The Infiltrator, followed by the first look image featuring Cranston and Diane Kruger. 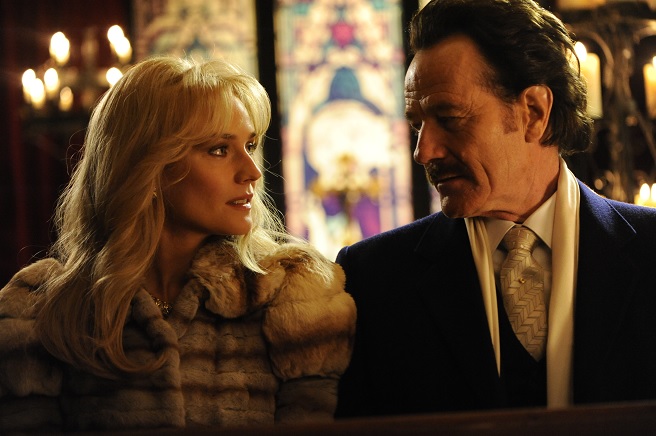 Once Breaking Bad ended, Cranston was put into that box of actors/actresses who will now be followed through the rest of their career. And while it’s a safe bet that nothing will come close to Heisenberg, it’s pretty exciting to see Cranston get a role he can really sink his teeth into, especially one that involves cartels and drug lords.

The Infiltrator will be released some time in 2016.

Which image do you like the most? Which movie sounds most interesting to you?