Alejandro González Iñárritu is in now way sitting around enjoying his success. As we are cruising through award season, his Birdman is picking up nomination after nomination. While Birdman gets incredible praise, Iñárritu is back at work in Canada filming his next project with some big talent. Here’s our first look at The Revenant.

The Revenant stars Leonardo DiCaprio, Tom Hardy, Domhall Gleeson, and Will Poulter. Below you can see both DiCaprio and Iñárritu at work thanks to Entertainment Weekly. 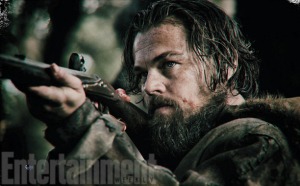 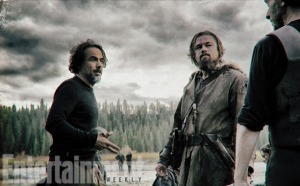 The images aren’t much, but if they are any indication to how the movie will look, The Revenant will have a very distinct, cool, and beautiful look to it.

The Revenant is based on the true story of Hugh Glass, an American fur trapper who was attacked by a grizzly bear in the 1820s. He’s then robbed and left for dead, ends up surviving, and vows to get back at the men who left him. Glass’ story was turned into a novel by Michael Punke, which serves as the blueprint for the movie.

In the same article the images were posted in, director Iñárritu got to talking about his leading man and the unique way The Revenant will be shot:

“He’s a brave, incredible actor. I’m so surprised about how good he is. I think there’s a profound understanding of humanity that I can see through his eyes.”

“It’s a fun ride. It’s a very experimental thing that we’re doing here… I’m now addicted to doing things that can fail horribly or maybe that can give us a surprise. We are all into it.”

After what he was able to do with Birdman on a smaller budget, I can only imagine what he’ll be abel to do with a bigger budget this time around and another outstanding cast line-up. Keep an eye out for this one come next award season.