Marvel’s new superhero movie Ant-Man has been on a marketing frenzy lately. And it’s understandable as more than ninety-five percent of the movie-goers have no idea who the character of Ant-Man and his world is. Just a few days ago saw a batch of images from Entertainment Weekly released with some tidbits from director Peyton Reed and star Paul Rudd. Now, some more images were released, but this time with some cool tidbits/details on the villain Yellowjacket from Yellowjacket himself, Corey Stoll.

Before we get to the information, here are the images. Which feature Paul Rudd as Scott Lang a.k.a. Ant-Man, and a very cool close-up concept art of the Yellowjacket suit. 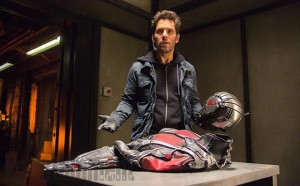 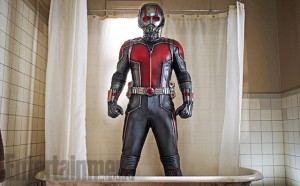 Two things I would like to point out. One is the image of Ant-Man riding the fly. We saw glances of it in the trailer but the image gives us a really cool look at what the look will be like when Ant-Man is shrunk down. A much more bright and vibrant setting, it makes sense as everything is much bigger. Second is the awesome concept art of Yellowjacket. We have yet to see him in any footage, I’m guessing the second trailer will debut him, but this image should hold us over until then. It’s a really good and cool look, is it bad that I like the villain’s suit more than our heroes?

Now onto the tidbits from Corey Stoll. Oh and by the way, thank you to Entertainment Weekly for all of the images or information that’s been released. While speaking with EW, Stoll got into the background of his character Darren Cross, as well as how his Yellowjacket suit differs from the suit of Ant-Man:

“I was this child prodigy that Michael Douglas’ character Hank Pym discovered at an early age. He nurtured me and I was part of his technology company. I started to become aware of these rumors of this fabled technology that can shrink people to half an inch while keeping their full-size strength. And I became very obsessed with it and demanded that we move forward. But Pym had sort of buried it for ethical, moral reasons.”

“Now, I’ve discovered my own version of that technology and I’m using it for militaristic purposes. I’ve even started to use the technology myself, which as a sort of psychotic effect on people if they use it too much. I can’t get into the details of all the goodies of the Yellowjacket suit but it’s several generations advanced from what Ant-Man has. And then I put it on—and then I am Yellowjacket!”

That’s some pretty interesting and good stuff. I’m guessing that’s as much as we’re going to get on anything as Marvel keeps everything tight-lipped pretty well, but it’s definitely more than we were ever expecting to hear. From all that was said, Marvel seems to be taking a pretty cool approach to it, which means it should be very entertaining to see it play out on screen.