Below you see new images for some of the ‘geekiest’ movies of 2015. Including Marvel’s gigantic superhero team-up sequel Avengers: Age of Ultron, the return of the Mad Max franchise in Fury Road, the return of the Terminator franchise in Terminator: Genisys, the big screen adaptation of the classic TV show The Man from U.N.C.L.E., and The Divergent Series: Insurgent (dumbest title ever), check them out.

Here are the new images: 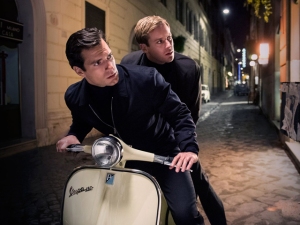 First is the Age of Ultron image, and although it isn’t much, there are a few things to pick apart. First is that they are all in combat worn and still in uniform (new, awesome ones at that). Only question is, which battle did they just end? Another thing that can be pointed out is the look on their faces, it looks like they are stepping to a door (to someone they know) and have that ‘We need your help.’ look on their faces. Lastly is why are they at a normal, everyday house? Who are they visiting? What significance does that house have? We’ll all find out in May!

The Fury Road may be the most interesting. As most of us fans know, Max doesn’t speak much in these movies. He never has and we expect that to happen in this new movie. But the image above does seem to be one of the few shots we’ve seen where Max is actually talking, and talking to the incredible gorgeous and completely badass Charlize Theron who is playing Imperator Furiosa. Is that a bluetooth piece in his ear?

The next three don’t really need much to talk about. The Terminator: Genisys image shows the new updated version of the endoskeleton. The Man from U.N.C.L.E. image features stars Henry Cavill and Armie Hammer, only question is is how can two large men like those two fit on that vespa? Expect The Man from U.N.C.L.E.  trailer in the coming weeks. Lastly is the pointless new image for The Divergent Series: Insurgent, which just shows three of the young stars of the movie. Can you tell I don’t care for this series?